As a followup to my post the other day concerning the potential loss of off-leash dog walking in parks and beaches maintained by the Golden Gate National Recreation Area (GGNRA), I wanted to mention that there’s a San Francisco Board of Supervisors meeting tomorrow night (3/10/2011). Item #2 on their agenda deals with the proposed GGNRA plan. I encourage all Bay Area dog-lovers to attend and show your support.

You can find additional information on the Facebook calendar event. 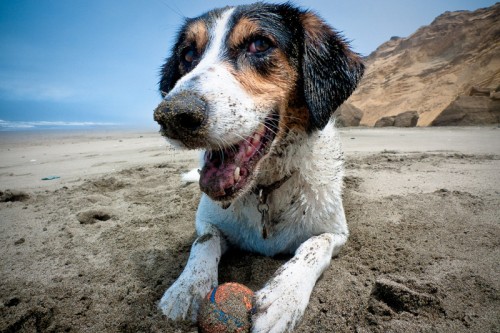 I moved to San Francisco in 2003, and I’ve always taken our dogs to Fort Funston – a wonderful off-leash beach about 20 minutes away from our house. The picture (above) is our dog, Maggie Moo, enjoying some time on the beach.

Although San Francisco is generally fairly dog friendly, there actually aren’t that many off-leash areas, especially close to the city, so we really treasure Fort Funston.

As a dog lover, who only has a limited number of off-leash areas available, the prospect of this plan passing is extremely disturbing. Currently, dogs are only allowed in about 1% of the GGNRA, so it’s absolutely astounding to me that they’re looking to take most (or all) of these areas away from us.

The draft-plan was originally released for a 90 day public review and comment period, which has now been extended to May 29, 2011. I strongly encourage all dog owners to get involved and voice your concern over this proposition. Basically, speak now or forever hold your leash.

I’ve included links below for the draft plan, maps, and other helpful information. I also encourage everyone to show your support by attending one of the public rallys / meetings.

May 29th, 2011
Deadline for public comments regarding the GGNRA Dog Plan