Apparently, that great new Remote Disc feature for the Macbook Air that allows you to use another computers optical drive doesn’t work for installing Windows on your Mac, for watching DVDs, or for playing or importing music. That’s just stupid! [LINK]

AppleInsider is reporting that new MacBook Pros are only weeks away, and they’ll sport the new multi-touch trackpad as seen on the new MacBook Air. [Link] 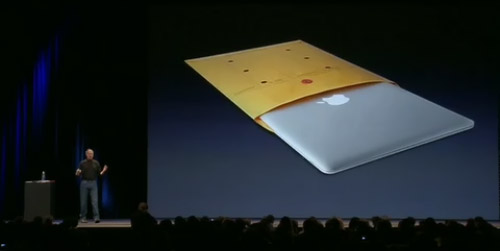 I’ve been pretty swamped this week but I thought it was about time I got to a followup post to my Macworld predictions. I didn’t do so well this year. Most of my predictions were actually wrong. And, in all honesty, what was announced left me slightly disappointed.

As we all know by now, the big announcement this year was Apple’s new ultra-slim laptop, the Macbook Air. The new Macbook Air is, in a word, stunning. It’s also an engineering marvel, and we should all praise Apple (and Intel) for this accomplishment. But, as cool as the Macbook Air is, I honestly can’t see myself buying one anytime soon.

In my opinion, the Macbook Air is totally inappropriate as a primary machine. And, with a price tag ranging from $1799 to $3098 for the base models, it’s an extremely expensive secondary machine. The technical specs on this computer by no means justify its price tag. You’re really just paying for the wow factor. On a side-note to this, I think it’s kind of sad that the largest hard drive available for the Macbook Air has LESS capacity than what’s available in the iPod (Classic).

I was all for Apple moving into the sub-notebook market, but unfortunately they chose to enter through a route that will be out of reach for most people, myself included. Apple’s clearly targeting consumers that require very little form their computer, and are willing to pay top dollar for it.

Apple made some significant usability improvements to the Google Maps application. I was really glad to see that. If you haven’t seen these features, there’s a guided tour available on the Apple site.

I just have one question for Apple regarding the iPhone… Where’s my freakin ToDos? The ability to sync iCal ToDos should have been part of iPhone software 1.0. After 3 updates they still haven’t added this feature. What the hell? I don’t understand why this is so difficult. Can you tell I’m pissed about this? Please, Apple… give us ToDos!

Time Capsule is Apple’s new hardware companion for Leopard’s built-in backup feature, Time Machine. It’s basically an Airport Extreme base station with a built-in hard drive, allowing you to wirelessly backup all of the Macs on your local network. They come in 500GB ($299) and 1TB ($499) capacities. For what you get, these prices aren’t bad. In fact, it’s more than likely that I’ll be buying one of these… partially because I was planning on buying a new Airport Extreme anyway to replace my aging NetGear router that has become a little flakey.

Apple now offers 3 Airport base stations… Airport Express, Airport Extreme, and Time Capsule. If you’ve been considering buying one, but you’re not sure what the difference between them is, Apple’s broken it down on this comparison chart.

Not much to say about this. It is what it sounds like. You can now rent movies through iTunes. They cost $2.99 for library titles, $3.99 for new releases, and $4.99 for HD. Initial selections are a bit small (especially for HD), but all major studios are on board.

Well, Apple didn’t come out with an actual television like I predicted, but they did make some significant updates to their Apple TV set-top box. The biggest news is you no longer require a computer to use it for viewing iTunes store content. The Apple TV can now access the store directly. You can also access Podcasts, photos on .Mac and Flickr, and YouTube videos. Apple also lowered the price to $299 for the 40GB model and $329 for the 160GB model.

The one thing that really stunned me this year was no new Cinema Displays. I would have bet money on this one. At very least I expected built-in iSights. After all, it’s been quite a while since they quietly stopped selling the stand-alone versions.

One interesting side-note about this is if you go to the Apple site, and click on the store, Displays aren’t even pictured. They’re listed under accessories. It’s as if they’ve become second class products.

If you watched the Macworld 2008 Keynote, you know that Steve Jobs introduced the Macbook Air, Apple’s super-slim new laptop, by taking it out of a manilla envelope… to illustrate just how thin it really is.

Immediately after watching the keynote, Jona Bechtolt and Claire L. Evans came up with the idea for the perfect sleeve for the new device… the AirMail.

“The AirMail laptop sleeve is handmade out of durable upholstery-grade vinyl, and lined with fuzzy, soft fleece. All AirMail sleeves have the same dimensions as standard interoffice manila envelopes, which will serve to remind you — and everyone around you — that your new MacBook Air really is the thinnest laptop in the world!”

I personally think this is awesome. What began as a simple publicity stunt by Apple, turned into an idea for a clever new product by a couple of industrious quick-thinking people who were willing to run with it. Well done Jona and Clair!

The Airmail is available for pre-order for $29.95. The duo says it will be available by the time your new Macbook Air arrives.