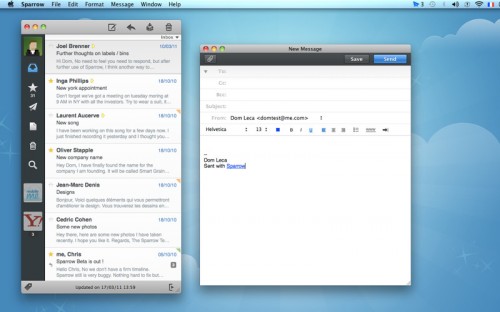 Today I gave Sparrow a try. It’s a simplified Mac email app that recently gained support for imap email accounts. Prior to version 1.1 it was strictly for use with Google’s gmail (which I don’t use).

I was curious about the idea of using a much more streamlined email client. Currently I use Apple’s Mail, and although I have no real complaints about Mail, I’m always looking for ways to simplify my day. I wasn’t sure if I would like Sparrow, but that’s the beauty of imap – if I decided I didn’t like it, I could seamlessly go back to Mail without worrying about losing anything or having to migrate from one app to another since all the mail lives on the server and syncs to any app I use.

Unfortunately, Sparrow’s imap implementation has one big problem that made going back and forth a little more painful than it should be. When I set up my email address in Sparrow it didn’t recognize my existing imap folders for Sent, Drafts, Junk, and Trash, so it proceeded to create it’s own versions of these folders. That kind of sucked, but the real oversight from the developers of Sparrow is not building in any way to manually map it’s folders to your existing folders. The result is I now have two sets of folders – one being used by Sparrow, and the other being used by Apple Mail. Both sets actually show up in both apps, so messages aren’t getting lost, but it adds a layer of complexity that doesn’t need to exist.

Supposedly the next version of Sparrow will add the ability to map existing folders, but in my opinion the imap support should have never gone live without this basic functionality. I won’t be trying it again until they fix this.

Although my testing was cut short due to Sparrow’s lack of proper imap support, there was one (negative) thing that jumped out at me right away. If you select a message and hit the delete key, the message isn’t moved into the trash, it’s moved to a folder called, archive. Presumably this behavior is due Sparrow’s roots as a gmail-only app, because gmail archives deleted messages, but I found this behavior just plain wrong.

To me, an Archive is a safe place you use to store items you’re no longer actively accessing, but you need to keep for possible future use. The Trash on the other hand is a place you put things that you no longer want to keep. By these definitions, it makes absolutely no sense to hit the delete key to move items to a “safe place”. As the name implies – delete means throw away. I can’t think of any other software where hitting the delete key actually saves something instead of deleting it. To make things worse, Sparrow also has an Archive button – clicking it also moves items into the archive folder, so essentially archiving and deleting do the same thing. If you truly want to delete something you have to hit Command-Delete. I find this behavior very confusing and I hope they correct this soon.

My last gripe is actually directed at the developers themselves. They kind of make it a little difficult to have conversations with them as they’ve somewhat closed themselves off. Their blog is powered by Tumblr, so that means no comments. Their suppor site is hard to find, as they don’t even provide a link to it on the Sparrow site. I personally find this annoying.

If you’re using Apple’s Mail application and your messages are disappearing, check out this tip at MacFixIt.