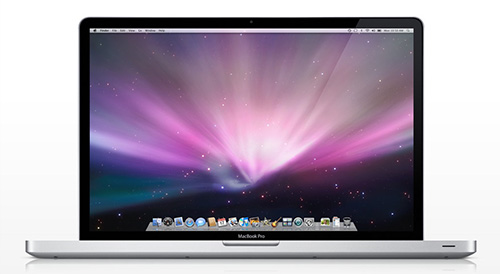 If you haven’t already read this at a hundred other Mac sites, here’s what Apple announced today at Macworld:

17″ Aluminum Unibody Macbook Pro
Starting at $2799, the new 17″ Macbook pro will ship in late January. The good news is this thing can take up to 8GB of RAM. The bad news is, rumors were true… the battery is no longer a user-replacable part. That just sucks. Although, Apple is saying that this new and improved battery will last 8 hours on a single charge and can be recharged 1000 times (5 times the industry standard). Apple is also saying this new model is the slimmest and lightest 17″ notebook available.

It should also be noted that while the 17″ version uses the same Glossy display now used in its 15″ cousin, Apple is offering a $50 upgrade to an “antiglare display”. I thought they use to call this “matte”, so I’m not sure if this is the same option as previous models. Also, the new native resolution is 1920×1200, up from 1680×1050. In the previous 17″ model, it was a $100 upgrade to the higher resolution display. When I was shopping for my current 17″ Macbook Pro, I actually thought 1920 was a little too much for 17 inches.

You can read all the specs on Apple’s site.

iLife ’09
iPhoto now has face-recognition and geotagging built-in. It can also link with Facebook and Flickr. It actually looks pretty cool. Too bad I’m not really using iPhoto anymore. I’ve started moving everything into Adobe Lightroom.

iMovie has several new features bringing it back a little closer to iMovie ’06, instead of the radically different iMovie ’08.

There’s new versions of Garage Band, iWeb and iDVD as well. iLife ’09 will ship at the end of January. Read all about it on Apple’s site.

iWork ’09
I like iWork, but there’s nothing terrible exciting to talk about… seems like mostly basic improvements and refinements. iWork ’09 ships today.

iWork.com
Apple is starting iWork.com. Currently in beta, this will be a site for sharing and collaboration. It’s free while in beta, but Apple will charge for it in its final release.

DRM Free Music, Price Changes, and Purchase via 3G
Apple is moving away from $0.99 songs. Instead, there will now be a tiered structure of $0.69, $0.99, and $1.29 per song. Starting today they will offer 8 million songs as DRM free. The entire catalogue will be DRM free by the end of the quarter. You can also now buy music on you iPhone over the 3G or Edge networks, instead of wi-fi only.

My Thoughts
I didn’t think there was going to be any huge announcements today, but I am a little disappointed at what was announced. There were a few things that I would have bet money on:

Oh well, I guess we’ll have things to look forward to in 2009. I’ll be heading over to the Expo after Lunch. I’ll write about any must-haves that I find.