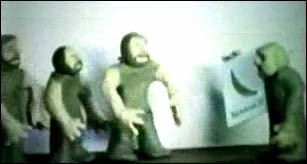 A friend of mine here in San Francisco, Dave Ross, was into stop-motion photography and film making when he was younger. This 8mm film was made in 1980 while he was at UC Berkeley (at Barrington Hall). It’s called ‘Onngh Yanngh’ (pronounced ong yang). I liked it so much that I decided to post it here, with Dave’s permission of course. Dave would like you to consider two things when watching / commenting on this movie…

QuickTime is REQUIRED to view the movie

UPDATE: 11.23.06
Dave passed away on November 15th, 2006. He was a good friend, and will be missed. I originally posted the Onngh Yanngh movie back in 2004. I have several other movies of his that I’m now posting, as a memorial. They are available for viewing and download on Google Video by following the links below. I hope you enjoy them, and they bring back fond memories for all who knew dave.
– Onngh Yanngh
– Front Lawn Studios
– Bug Snack
– Slime
– Good Dip
– Kitty in the Hobart
– Mr. Bill
– School Daze
– Film at 11
– Last Animation 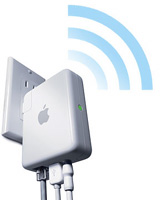 Today Apple announced ‘Airport Express’. The world’s first mobile 802.11g base station. Plug it right into the wall for wirless internet and USB printing. Throw it in your laptop bag for wireless hotel rooms. Connect its audio output to a stereo and wirelessly stream your iTunes music to any room in the house.

If you haven’t seen this, Ronald Reagan’s body is being driven around California today. He then flys to DC for display, then back to CA for display & burial. Is it just me, or does it seem a bit strange that his body is on tour for people to see? I personally think that is a little degrading. Let the poor man rest in peace already.

This is just a commentary on how times (and TV) have changed… I cought a bit of The Andy Griffith show this morning at breakfast. Aunt B’s sister & her husband came to visit. Aunt B’s sister slept with her, and her husband slept with Andy, in his bed. Not only could they not show a man and woman in bed together, but the show went out of it’s way to point out that they were NOT sleeping together (even though they were married). Today they would have been half naked, and on top of each other… married or not.

I occasionally google myself to see where I rank. I am typically first in the results, but this morning I found that I have finally been bumped down to number two. Paul Burd car sales has taken the lead. Bummer :(

Last night anne marie and I went to a BBQ at a friends house. One of the people there suggested a breakfast place with outdoor seating (I love eating outdoors) in the Castro called ‘The Patio’. We tried to go there this morning and found out that it had closed 4 years ago. I guess he hadn’t been there in a while.

But, we did find a great little place called ‘LUNA’. It’s at 558 Castro Street. It has a beautiful back patio / lush garden. It is reasonably priced (for San Francisco), and has very good breakfast. I would reccomend it. The only downside was they don’t offer toast with Breakfast, just biscuits. I like my toast :)

Toshiba today announced that it will offer a 60GB version of its 1.8-inch hard drive in the coming months and that Apple has already placed its order. Cindy Lee, deputy manager of Toshiba’s hard disk drive division, said the drive will enter mass production during July or August. All three iPod models (15GB, 20GB, and 40GB) use Toshiba drives, while the iPod mini uses a 4GB 1-inch drive from Hitachi. Lee noted that Toshiba is currently shipping 350,000 of the 1.8-inch drives per month to Apple.

So I’m in the process of switching from Apple’s ‘mail’, ‘iCal’, and ‘address book’ to Microsoft’s ‘Entourage’. It totally sucks though. I actually really like iCal and address book, I just don’t like Apple’s mail.app. It’s not quite up to snuff. I have PC based clinets who were getting blank emials from me, or attachments that were embeded, and they couldn’t save them to their drive. I hate to use Entourage just for email, because that kind of defeats the purpose (and benefits) of using the all-in-one app. On the other hand I really don’t like the idea of giving up my .Mac synchronization if I don’t use iCal / address book. I really like having the ability to keep my desktop and laptop in sync, with little or no effort. But, Enourage’s new ‘Project Center’ is awesome. It’s so nice being able to link contacts, calender items, tasks, emails, and files in one central location.

There are a lot of other little ups and downs to both systems. Why, oh why, can’t I just have one solution that does everything I want? Is that to much to ask? :)

— From Mac OSX Hints
“If you have Stickies open, you can use it to quickly open and view PDF documents. Simply drop a PDF file into a sticky note and it appears inside the note with its own scroll bars constrained to the size of the note. If the sticky is translucent, then the PDF appears translucent too.

Unfortunately, this trick only works with PDF files and not RTF or DOC files. If you drop any type of file on a sticky other than a PDF or textClipping, you only succeed in inserting a picture of the file’s icon.”

A couple of months ago anne marie and I were at a party, when someone spilled some wine on the carpet. They quickly sprayed shaving cream on the stain and began rubbing it in with paper towells. To my surprise the stain was gone in a matter of seconds. I was reminded of this last night when we had some red wine spill on a white shirt. We sprayed a little shaving cream on it and rubbed it in. Within a few seconds… poof, the wine completely disappeared. You then just rinse the area with a little water. It’s actually quite amazing to see. We have found that the ‘foam’ kind works much better than the ‘gel’ variety.