This totally makes me want to go to Norway.

I never really thought about it, but this video sure makes Iceland look fun. Oh, and if you’re wondering what that awesome song is, it’s called Jungle Drum by Emiliana Torrini. 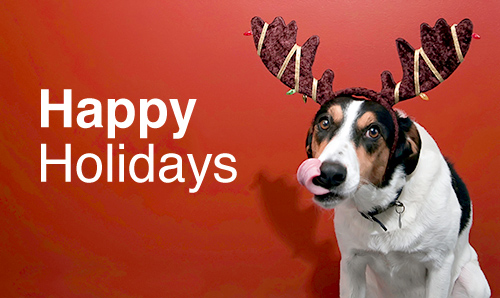 We’re still in Phoenix, and I’ve been staying at a house with no internet access (can you believe it?), but I wanted to wish everyone a happy holiday so we stopped into a Starbucks for a quick web fix.

The image above is from our 2008 Christmas card. That’s our dog, Maggie Moo. You can see the back of the card here.

I was hoping to get a few posts out today, but I have been scrambling to get ready to drive to Phoenix for the holidays. We’re leaving first thing in the morning. We’ll be gone until January 2nd, and internet access may be sporadic, so things might be a little light around here for a bit. Happy Holidays!

The is a simulation that displays the flight path of every commercial flight in the world over a 24-hour period. You can see more videos like this over at Wired. 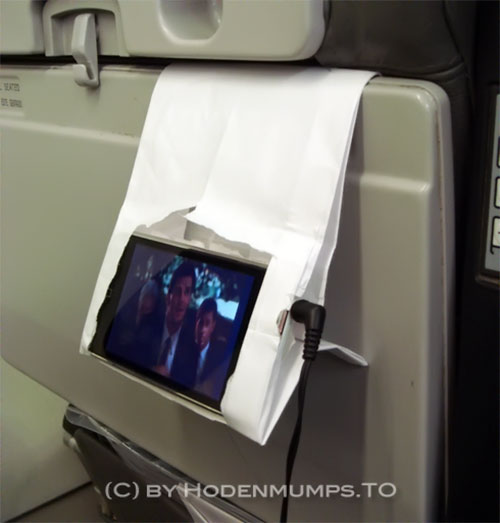 Filed under, why didn’t I think of that… Here’s a great little lesson in making do with what you have. It’s a fully adjustable iPhone/iPod mount using nothing more than an airsick bag and the seat-back tray. Perfect for your next flight.

We made it back from our Milwaukee trip. We had a great time, but the travel home was a bit grueling. Several hours were added to our travel-time because we had to fly to Delta’s hub in Atlanta before heading home. It was about 12 hours from the time we arrived at the airport in Milwaukee to the time we landed in San Francisco. We touched down at SFO at about 2:00am Sunday Morning. We missed the last BART train so we had to take a cab home. We were exhausted. We pretty much slept all day on Sunday to recover.

We had delayed flights. We almost missed our connection in Atlanta. We flew with crying babies, broken video systems, and a guy who barfed all the way to Atlanta. And, just like our trip to Milwaukee, our luggage didn’t follow us all the way home. It stayed in Atlanta, and apparently got left out in the rain as it was soaking wet when it was delivered Sunday night.

I’m not a big fan of flying anyway, but this trip was probably the worst experience I’ve ever had. I did learn 3 important lessons:

We’re spending Thanksgiving with Anne Marie’s family in Milwaukee this year. We’ll be traveling most of the day tomorrow. We come back on Saturday. I should have access at the hotel, so I may post a few things while we’re there.

UPDATE (11.26.08): After a quick detour to Atlanta, our luggage has arrived in Milwaukee. The extra clothes are nice, as it’s 20 degrees here tonight.

I have to admit that part of my reasoning for posting this is just the fact that I like how the TSA has titled this document, “New Policies for Lighters, Electronics, and Breast Milk“. Because, you know… those items are so commonly used together, :)

“In an effort to concentrate resources on detecting explosive threats, TSA will no longer ban common lighters in carry-on luggage as of August 4, 2007. Torch lighters remain banned in carry-ons.

Lifting the lighter ban is consistent with TSA’s risk-based approach to aviation security. First and foremost, lighters no longer pose a significant threat. Freeing security officers up from fishing for 22,000 lighters every day (the current number surrendered daily across the country) enables them to focus more on finding explosives, using behavior recognition, conducting random screening procedures and other measures that increase complexity in the system, deterring terrorists. The U.S. is the only country in the world to ban lighters – all other nations, including Israel and the U.K., do not.”

I like how they say, “lighters no longer pose a significant threat”. As if they ever did. One other thing that cought my eye was in the FAQs…

Q. Do passengers carrying breast milk need to taste it to prove it is not a liquid explosive?
A. No. We will not ask a traveler to taste breast milk.

I’m way behind on blogging, and email, but you know what… I don’t care. We’re leaving for a well deserved vacation. We’re off to Wisconsin, Michigan, and Illinois for about a week. It has been a struggle (to say the least) wrapping up work before tomorrow, but I did it.

I may be posting from the road if I get a chance, but I’m not sure what kind of access I’ll have.

If I owe you an email… be patient. I will get back to you.