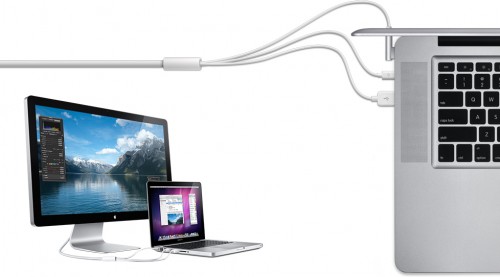 If you haven’t already heard, Apple updated its entire line of Macbook Pros this morning. Like usual, the new models have updated processors, graphics cards, etc… But the biggest new feature is the addition of a new port called, Thunderbolt.

From Apple:
“…Ultrafast and ultraflexible, the Thunderbolt pipeline is more than 12 times faster than FireWire 800 and up to 20 times faster than USB 2.0, and it offers unprecedented expansion capabilities. It changes what you can do on a notebook.”

Sounds great, right? But, there’s one important thing to know – the new port isn’t an additional port, it replaces the existing Mini DisplayPort. You might be asking, how can this be?

From Apple:
“The Thunderbolt port will give you plug-and-play performance with a whole new world of Thunderbolt peripherals, as well as with the Apple LED Cinema Display and other Mini DisplayPort peripherals. You can daisy-chain as many as six devices, including your display.”

OK, that answers that. But, there’s just one BIG problem with this setup – the cable! Apple Cinema Displays have a wonderful 3-pronged cable that carries power, video signal, and usb (to power the usb ports on the back of the display). If you use the cable the way it’s intended, there’s no way to plug anything else into that port.

Currently, the only way to use your display and an additional device at the same time, is to physically position that device within a few inches of the Thunderbolt port on the computer and divert the (short) video cable to that other device – then run a cable from the secondary device to the computer. Am I the only one who thinks that’s just plain stupid?

At some point (soon) Apple will probably come out with new displays that either have Thunderbolt ports on the back, or have a reworked cable, but until then, this implementation isn’t very practical.

I’m all for reducing the number of ports / cables required for a given system, but I’m not sure how well it works to include your display in a daisy chain. It requires you to either have additional ports on the back of the display (so it can be first in the chain), or have your display at the end of the chain – which seems impractical for most workflows. Realistically, a good chain should have your most-used device at the front, and the least used device at the back. Of course, another option would be to use a hub, but now you need an additional piece of hardware, which to some degree works against the whole idea of reducing.

7 thoughts on “One Big Problem with Apple’s ‘Thunderbolt’”