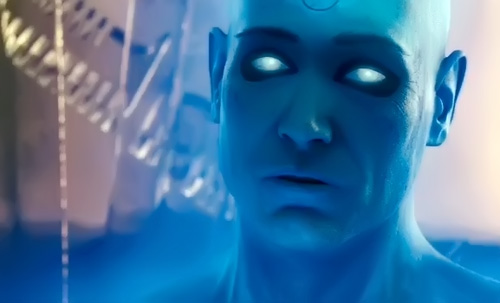 I finally went to see The Watchmen tonight, and I have to say I’m sorry I did. I was very disappointed.

The film had some nice visuals, and it had a couple concepts that could have been really interesting to explore, but the story (if you can call it that) dragged on and on, and never really went anywhere. I was ready to leave about halfway though.

I did like the idea of the Dr. Manhattan character… becoming so disconnected from humanity when he’s altered in such an extreme way. I also liked the idea of what may happen to masked heros as they age, or what their personal lives might be like, but although the film touched on these story lines it just didn’t go far enough.

I was also a little confused by the fact that, with exception to Dr. Manhattan, none of these masked heroes appeared to be anything other than normal humans, yet they still exhibited super-human abilities… like punching though concrete walls and catching bullets with their bare hands. I also had no idea what caused Warshak’s mask to move, or what was up with that strange, horned, egyptian cat that just came out of nowhere (and why was no one surprised to see it)?

I’m giving The Watchmen 2 stars, and I should clarify my scale by saying I give one star simply for making a movie. The other star is for the few points in the film that I did like, but they weren’t enough to make this an enjoyable experience.

Save your money and wait for The Watchmen to come on TV… late at night when you don’t mind falling asleep while watching.