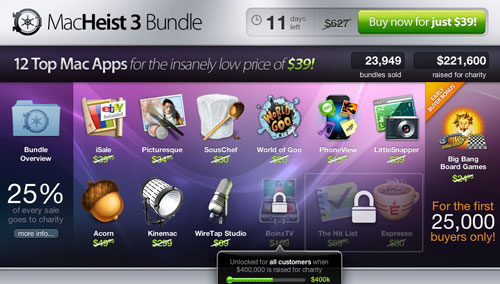 The MacHeist people have outdone themselves this year. They’re offering up to $975.70 in Mac software, for only $39. There’s some pretty nice titles in this years bundle.

If you’re unfamiliar with MacHeist, the short story is they bundle a bunch of Mac software together, sell it for significantly reduced pricing, and give 25% to charity. The more copies that sell, the more software is added to the bundle. It just gets better and better. Everyone who buys the bundle gets all the software, even if the title wasn’t included at the time you bought in.

Most people probably don’t care about the entire bundle, but the cost is so low that you’re generally getting the 1 or 2 apps that you do want for a very good price.

As of today there’s only 11 days left to participate, so head on over to MacHeist.com and grab your copy before it’s too late.