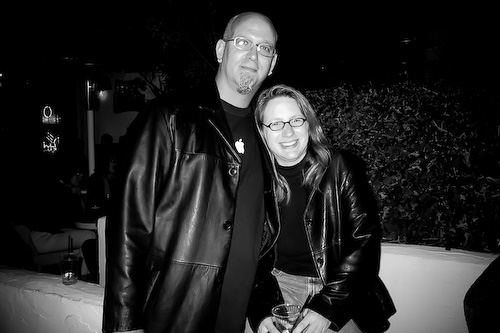 In the previous post I mentioned I had some big news to share… Well, we’re getting married! On September 5th, 2008, Anne Marie agreed to be my wife. :)

September 5th was our 5 year anniversary. It was on that date in 2003, that I came up to San Francisco to see her for the very first time. I lived in Tempe, Arizona when we first started dating. We knew each other through a mutual friend. The image above was taken at one of my favorite places in Phoenix, a couple months after we started going out.

I’ve been very happy with Anne Marie, and I’ve known for quite a while that we would eventually get married. I didn’t doubt that, but it never seemed like something I needed to rush into. It was probably about May or June of this year that I started to realize we were coming up on 5 years, and maybe it was time. I had been thinking about proposing on our anniversary, but I have to admit that until my father passed away in August, I was still on the fence. When my father died, it really reminded me that lives can change very quickly, and there’s no sense putting things off that are important. If you do, you may never get the chance. So, I decided September 5th would be the day.

With the date of my proposal set, I now needed a ring. Anne Marie had actually (semi-jokingly) told me a long time ago that if we ever got married, SHE would pick the ring! But, you can’t ask someone to marry you without a ring… that just doesn’t seem right. I debated on what to do. Should I try my luck at picking something nice? Should I give her a ring pop? Should I just go to the hardware store and pick out a nice wire key-ring? As tempting as some of these options were, I decided it would probably be best if I got something, not too horrible, as a placeholder that she could actually wear if she wanted to, while we looked for the real ring. So, that’s what I did.

As September 5th approached, it was NOT looking great to have a special evening out for our anniversary. We were both swamped with work, I couldn’t get reservations at the restaurant I wanted, and I was recovering from a fall I took in the street where I sprained my ankle (but that’s a whole other story). When the day arrived, we actually ended up just going to our Friday-night standby, Chevys. It was very unromantic. As the night went on I decided that this was just NOT the night to propose.

After dinner we came home and watched some TV. I was pretty bummed about the whole thing. I was trying to figure out what my alternate plan was going to be, but as it turns out we had some good luck that night… we were in the middle of a heat-wave here in San Francisco. I know, that doesn’t sound like good luck, especially when you live in a place with no air conditioning, but just wait. Because of the heat, we pulled our mattress down to the lower level of our loft and put it by the sliding door that leads out to our little balcony, to try to keep cool. As we laid there, unable to sleep, we started talking about how I had come up to see her exactly 5 years earlier. She had just moved into this loft, so she had no furniture. We remembered our first kiss, which we had while sitting on the floor that we were now laying on. While we talked, the romantic moment that eluded the evening crept into the scene. I proposed, and all was right with the world.

Of course, the placeholder ring I bought was not even close to the right size. With a little stretching it did fit on her pinky finger though. I tried to do some research online about ring sizes, but apparently there is no relationship between height, weight and ring size. I also tried to look at the one ring she owns. She wears it on her thumb. One day I determined that it fits on my pinky. I thought there must be some magical mathematical formula based on the relationship between her thumb and my pinky that would tell me her ring-finger size. You know, like the square root of the circumference of a concentric pythagorean hypotenuse… theorem. Math obviously isn’t my subject, but it doesn’t matter anyway as there is no relationship between my pinky and her thumb. Oh well, a symbol is a symbol even if it doesn’t fit perfectly.

So, here we are, over two months later… and we have no date set and no real plan yet. That’s pretty typical of us. We know it will be outside, somewhere near San Francisco, and it will all be pretty casual. Neither of us is up for anything too traditional or elaborate. I’ll write more as we figure things out. I’m going to try and not get stressed out about any of the details. The important part is I’m marrying the woman I love and who loves me.

Oh, and after some legwork we did find that perfect ring. It’s made by a woman named, Jennifer Dawes. She does excellent work, and she only uses recycled gold and conflict-free stones. We highly recommend her.

9 thoughts on “We’re getting married!”