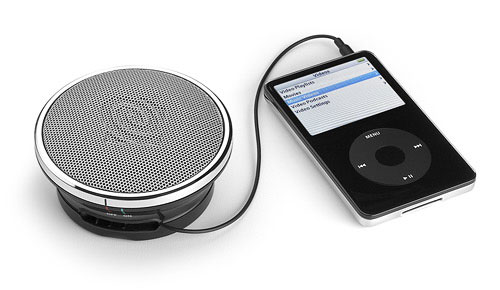 The day after Thanksgiving Apple was having their traditional 1-day sale, and I picked up this little travel speaker from Altec Lansing called, Orbit-M.

The Orbit-M was on sale for $28 (normally $39.95). I was a little skeptical of the sound quality of something so small, but I needed a new travel speaker, so I took the risk.

I have to say I am really happy with the quality of this little speaker. Sound is very clear, it has a reasonable amount of base, and considering it’s size it has surprisingly loud volume. I only heard a small amount of distortion when turning the volume to full. I backed it off just a little and everything was fine.

The Orbit-M’s built-in cable wraps neatly around the unit in a special groove, and the plug snaps into its own slot. The plug is small enough to fit into the iPhones headphone jack without the need for an adapter.

The manufacturer claims 24 hours of play on 3 AAA batteries, but I haven’t tested this yet. Since the unit uses AAA batteries, its relatively light, even with the batteries in.

My only real complaint with the Orbit-M is it’s on/off switch. It sticks, rather badly. I don’t want it to move so freely that it comes on in my suitcase, but this is a bit too much. The sticky switch, combined with the fact that there is no light indicating the unit is on, it’s sometimes hard to tell if you actually turned it off or not.

The Orbit-M obviously won’t replace your home stereo, or even a good boombox, but as a travel speaker it’s excellent. It’s more than enough for a hotel room, an outdoor picnic in a relatively quite location (not the beach), or hanging out with a few friends. I recommend this product.

side-note: The Altec Lansing site lists an Orbit-M and an Orbit-MP3. As far as I can tell, they are actually the same product. I think they are in the process of rebranding the M to MP3.