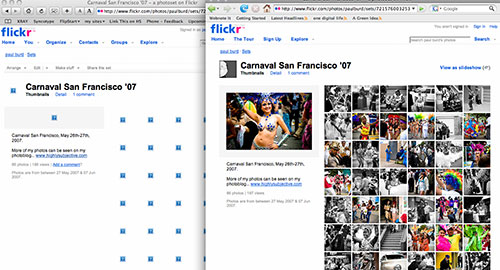 As a followup to my last post, here’s one of my Flickr Pages in both Safari 3 (left) and Firefox 2 (right). As you can see, Safari just won’t load the images. Where Firefox had no problem. The error listed in Safari’s Activity Window is, “Can’t find host”.

I’ve discover that this is not just an issue with Safari. In Leopard, I’m having problems with all of Apple’s applications that talk to the internet (Safari, Mail, Dashboard Widgets). Even though my connection to the internet is strong, all Apple apps have intermittent connectivity.

Is anyone else having this problem?

UPDATE (11.05.07): Thanks to a comment by Matt Smith, my connection problem is fixed… for the most part. I let the migration assistant bring over my network settings, but it apparently didn’t bring everything over. I was missing some DNS Server information (in the Network Preference Pane). Once I replaced those numbers things started working properly, almost. I still have some occasional connection problems, but they are much less frequent, and they appear to be more related to my router. Although everything is (almost) working, I think we’ll still be seeing an update from Apple on this issue. It’s odd that only Apple applications seem to need those numbers.