The folks at Agency Fusion have put together a truly awesome (and hilarious) little video spot for, Make My Logo Bigger!!! Cream. It represents every designer’s worst nightmare.

Read the full Story on MacWorld

Apparently the latest version of the Adobe Flash plugin is not totally compatible with Leopard. From what I can tell, you can play Flash in your browser, but some functions won’t work… specifically Flash uploading.

For instance, the photo-sharing site Zooomr.com uses a Flash tool to upload photos. They’ve posted a message on their uploads page that states Leopard users will NOT be able to upload photos to their account until Adobe fixes the Flash plugin.

Luckily, I can’t think of any online tools I use that use a Flash upload tool, but it’s something people considering upgrading to Leopard should be aware of. 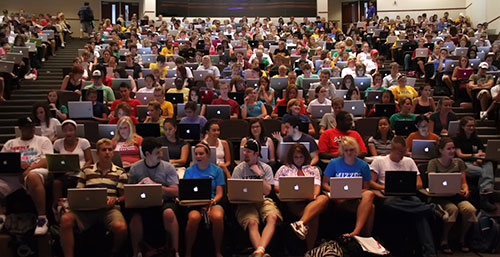 Taken at the Missouri School of Journalism. 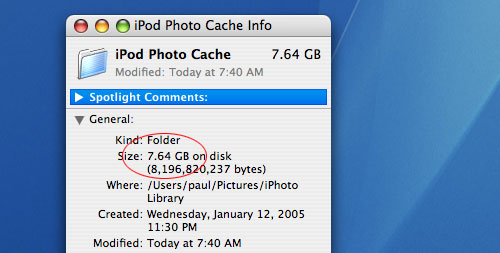 I used to sync my iPhoto library with my iPod, but I gave that up because I needed the space on my iPod for music and videos. Even though I haven’t synced my photos in months, I recently realized I had almost 8GB of valuable hard drive space being eaten up by an unused thumbnail cache.

Apparently these caches are created when you sync you photos to your iPod, but when I turned off that feature, iTunes, or iPhoto, or the OS never deleted the cache.

If you previously used this feature, but now you don’t, you may want to make sure you don’t have gigs of space going to waste. The folder is located in ~/Pictures/iPhoto Library/(name of iPod) Cache.

FYI… I’m currently using Tiger and iPhoto ’06. I don’t know if this tip holds up under Leopard, or iPhoto ’08.

I found this wasted space via the excellent freeware tool, WhatSize. It’s a handy little app that can tell you the size of all the files / folders on your drive. It’s great for locating missing drive space.

According to this article over at SwitchToAMac.com, we should be seeing new Macbook and Macbook Pros by the end of November. They’re basing their estimates on how many days (on average) there has historically been between updates.

Given the fact that I just bought a Macbook Pro, these estimates will probably turn out to be true. With exception to one machine, every Mac I have ever bought has seen new models within 2 weeks of me buying it. I’m just not on Apple’s schedule.

Macfixit is compiling a list of popular third-party software that is NOT compatible with Leopard. You may want to check it out if you’re planning on upgrading. 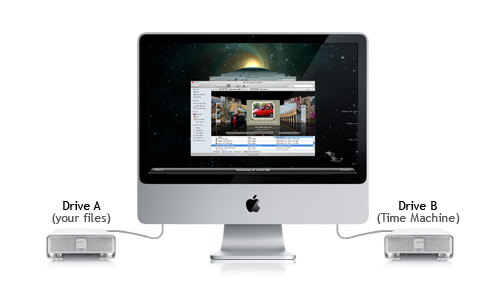 Example: Let’s say you have an iMac with an external drive (A) attached containing all of your active files. You then attach another drive (B) to use as your Time Machine backup drive. Is Time Machine pulling files from Drive A?

I can’t seem to find the answer to this anywhere. One of the guys at the Apple store thought that TM only pulled from your internal drive, but he wasn’t sure. If this is true, than Time Machine just became totally unusable for me. All of my files are located on externals, including my iTunes and iPhoto libraries.

If anyone can shed some light on this it would be greatly appreciated.

UPDATE: Thanks to the comments by bernd and Dave, it looks like the answer is yes… Time Machine will pull from other external drives. I’m glad the Apple store guy was wrong. :)

UPDATE #2: According to this comment over at The Apple Blog, non Time Machine external drives are automatically put into the exclude list. If you want your external to be backed up, you need to open Time Machine and remove it from the list.

I mentioned this in my last post, but I thought it was important enough to call more attention to it. If you’re considering buying a new Mac, DON’T BUY YOUR RAM FROM APPLE!. Apple RAM is incredibly overpriced.

As I mentioned, I’m upgrading my new Macbook Pro from 2GB to 4GB of RAM. Apple wants $700. I bought this 4GB upgrade kit from OWC for $167.99. This memory exceeds Apple/Intel specifications, and comes with a lifetime warranty. And, they will give me a $30 rebate if I send them the RAM that came pre-installed. I’ve bought RAM from OWC before, and never had any problems with it.

This same RAM works in the new iMacs as well. OWC also offers RAM for just about every other Mac, so I would check them out no matter what model you’re buying.

Well, I took the plunge. I bought a new Macbook Pro. I was hoping to get it at my local Apple Store on Friday when Leopard was released, but unfortunately they don’t stock the configuration I want. So, I had to order it online. It should be here Thursday morning. :)

I actually went back and forth quite a bit on model and configuration. Both the 15″ and 17″ have their benefits. Ultimately, I want this machine to be a desktop alternative, replacing a 4 year old G5 PowerMac. I chose the 2.4 GHz 17″ model.

The only upgrade I’m having Apple do is the hard drive. I upgraded it to the 160GB 7200 rpm option. I was tempted by the extra capacity of the 250GB 4200 rpm drive, but considering the fact that the 250 wasn’t going to be a enough space to hold everything, I’ll need to rely on external drives either way. It made sense (for me) to go with performance over capacity for the internal. I considered buying a third party internal drive, but I’ve read that unlike the Macbook, swapping the internal drive on the Macbook Pro is a relatively complicated procedure… and it may void your Apple warranty.

The upgrade that I will be performing myself is RAM. I’m upping it to the maximum of 4GB. The best advice I can give anyone purchasing a new Mac is, buy as much RAM as you can afford, but DON’T BUY IT FROM APPLE! When it comes to RAM, Apple lives in some strange (and overpriced) universe that has no connection to the current market. To buy the upgrade from Apple, it was going to be $700, which is pure insanity. I bought this 4GB upgrade kit from OWC for $167.99. This memory exceeds Apple/Intel specifications, and comes with a lifetime warranty. And, they will give me a $30 rebate if I send them the RAM that came pre-installed. I’ve bought RAM from OWC before, and never had any problems with it.

The default 17″ Macbook pro screen has a native resolution of 1680 by 1050. They also offer an optional high-resolution display that runs at 1920 by 1200. I seriously considered upgrading to the higher-resolution screen, but that’s a lot of pixels crammed into 17 inches. Things tend to be pretty small. I actually went down to the Apple store several times to look at the hi-res screen. At one point I decided to upgrade, but there is a big difference between standing at the computer for a few minutes in the store, and working on it all day. Although I though it would be fine, I was worried that my eyes would start to hurt after a long day of working. At the last minute I decided to stick with the standard display. I think I made the right choice. Although I plan on buying a new external display, I may wait until January, as I believe Apple will be introducing new displays at MacWorld (January 14th, 2008).

Speaking of MacWorld, I think there is a very good chance that Apple will introduce new Macbook Pros in January as well. I seriously considered waiting, but decided to go ahead and get it now. There’s no guarantee that Apple will release new models, and I’m long overdue for an upgrade. It’s too easy to fall into a pattern of constantly waiting for the next big thing. The current model is a good machine, and I think I’ll be pretty happy with it.

Now, I’m just looking forward to Thursday. I’m trying to get all my files / drives cleaned up in preparation for migrating over. I’m actually hoping that this new machine will replace 3 computers on my desk… the PowerMac I mentioned earlier, a 12″ G4 iBook, and a Dell desktop. I can’t wait to have just one machine!