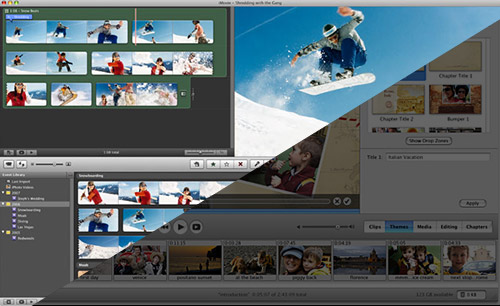 While the new iMovie has some interesting features, to me it seems like a totally different application. I would go as far as to say that it is no longer a video editing application. Instead, I would call it a video library application, with some limited built-in editing tools. It’s now actually more like iPhoto, for video.

If you’re planning on upgrading to iMovie ’08, there are a few things to be aware of…

First, and possibly most important, is iMovie ’08 will NOT open your iMovie HD projects. But, it will import them. What’s the difference you ask? When you import your old projects, all transitions, titles, effects, and music will NOT come in to the new iMovie. It ONLY brings in the video clips, with all transitions replaced with simple cross-disolves. This is a pretty big deal if you’ve ever made anything in iMovie HD that you hope to update.

Second, iMovie ’08 does NOT support third party plugins, themes, or effects. So, if you’ve bought any software that enhanced iMovie HD, you’re SOL for using it in the new iMovie.

Third, there are a lot of functional changes in iMovie ’08. Primarily, it no longer uses a timeline, so you can’t have multiple video or audio tracks overlapping, which makes it a pretty limited editing tool.

Personally, I would say that iMovie ’08 is NOT an upgrade at all. I would say Apple has discontinued iMovie, and replaced it with a brand new, different kind of application. To some degree Apple must think of it this way as well, as they obviously recognize that these are two different products. I say this for two reasons… one, installing iMovie ’08 doesn’t overwrite iMovie HD (if you have it installed), allowing you to use both. And two, if you buy iLife ’08, they’ll give you iMovie HD ’06 as a free download. They clearly recognize that iMovie HD is a more powerful editing tool.

For me, this change isn’t that big of a deal, as I use Final Cut Pro. In fact, I may find the new iMovie is more useful for cataloging my video. But for people who use iMovie as a video editor, you may want to take a long look at Final Cut Express. Who knows, maybe that’s why Apple did what they did?