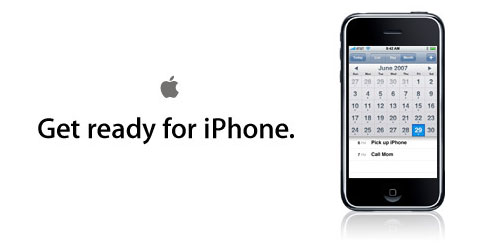 Unless you’ve been living under a rock, you’re probably already aware of the fact the Apple’s iPhone will be released on June 29th, 2007, at 6:00pm (local time). And, even though it’s only two weeks away I did go ahead and make an updated version of my iPhone countdown widget. It counts down to 4:00pm on the 29th, giving you an alert 2 hours before the sale so you can drop what you’re doing and run down to your nearest Apple or AT&T Store. Download it here.

So, what did you think of Apple’s solution for third parties to develop apps for the iPhone? If you haven’t heard about this, they basically told developers to build their “application” as a webpage, and users would access it via Safari. How generous of them. Can everyone say… lame!

I was kind of surprised that they even bothered to make that announcement at this years WWDC. After all, this wasn’t new information. Since the day iPhone was announced, we knew it had a browser (Safari), and internet access. It’s kind of obvious that it could access a web application. They made a point to say that your “application” could interact with the phone… like making calls, and linking to google maps. This isn’t new either. The version of Safari running on the iPhone can do that with any webpage. Apple didn’t build something new for developers. The whole thing was just insulting. I’m very disappointed that iPhone is still a closed platform.

Also, according to this article on TUAW, there is no support for Flash on the iPhone. This makes no sense to me. Apple has maintained that the iPhone runs a real copy of both OS X and Safari. If that were true, we should be able to install the same Flash plugin that you can use on your Mac. What’s up with that?