I’m a sucker for cool screensavers, and Helios is one of my favorites. Helios combines attraction / repulsion particle effects and smooth surfaces, in what seems like infinite combinations. I especially like that it works with multiple displays, putting something different on each display.

Ever wonder how a professional illustrator goes from initial hand-drawn sketches to final vector artwork? Go Mediazine has you covered with this step-by-step tutorial. Now if I could just learn to draw I would be all set. 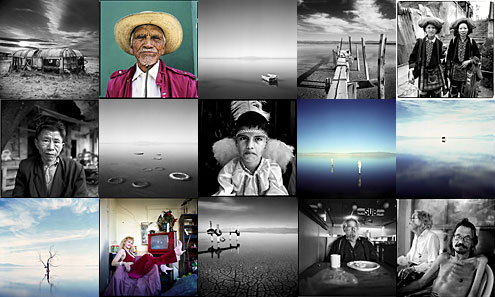 A while back I discovered the photographic work of Lung S. Liu. He has some really beautiful stuff. I like his work a lot.

From now until April 22nd, Lung is having a print sale. All the images above are in the sale, along with many more. Prices are very reasonable at $30 for the first print, and $20 for each additional print. So, if you’re looking for some new art, head on over to his site and check out his work.

If you’re a fan of Moo’s mini-cards, you might like to have a look at their new notecards.

This is a little off-topic for what I normally post here, but considering we use this dog food, I thought I should help spread the word to others who may use it as well.

Natural Balance has issued a voluntary recall of some of their dog and cat products. Check out their press release for full details. If you have any questions on the recall, you can call them at 1-800-829-449.

Have you used Lightbox, or Slimbox, on your site to display images, and wished you could use it for other types of content? If so, you may want to have a look at lightWindow. It’s the lightbox for just about everything else… QuickTime, Flash, PDF, other web pages, forms, inline content, and oh ya… images.

One area of design that I have never really felt I have mastered, is typography. I can make a nice layout, but it’s generally nothing all that memorable, or cool.

I am oh so impressed when I see designers do something extraordinary with type, and even more so with type in motion. I just love this clip by animator, Jarratt Moody. It uses Samuel L. Jackson’s, “What does Marsallas Wallace look like?”, from Pulp Fiction, as the subject matter. Nice Job Jarratt. You Rock!

For some strange reason, this site (onedigitallife.com) has started crashing Safari. It just started this afternoon. Every time I try to load the site, Safari crashes. No other sites seem to be doing it, and it’s held through a restart. None of my other sites hosted on this server are doing it, and the site works fine in Firefox.

Is this happening to anyone else?

UPDATE: I tried resetting Safari, disabling all plugins, and various maintenance tasks (repair permissions, repair drive, etc…), and nothing has worked, Safari still crashes. I tried accessing the site through Safari on my laptop, and it works fine, so that would suggest that it’s a problem with Safari on my desktop. So, I booted the desktop from an external firewire drive that has an old backup of my system (10.4.4). Guess what… it crashed that Safari too. That doesn’t make any sense at all. Anyone have any other suggestions?

UPDATE #2: So, just out of curiosity, I momentarily changed my WordPress theme back to the default (WordPress is the blogging engine used to run this site). Low and behold, I could open my site in Safari again. The moment I changed it back to my current theme, it crashes again. This makes even less sense, considering I haven’t made any changes to my theme lately, and plenty of people are able to view the current theme in Safari (including myself, on my other computer). This is just odd! Sometimes I just hate computers.

UPDATE #3: Thanks to a tip from Rob, I installed the Firebug add-on, for Firefox. It allowed me to see an error that was being intermittently generated by my site. Now, the actual language of the error is a bit over my head, but when I read it, I somehow got the idea that it was related to Snap Previews, a feature I use on the site. With a little investigation, I also discovered that Snap did announce some new “features” yesterday, so their change did correspond to the time that my trouble started. Sure enough, removing Snap solved the problem. Thanks Rob! Now, this doesn’t explain why this only seem to effect me, and not all Safari users, but I’m willing to let that be a mystery for another time.

Although the iPhone is on track for a ‘late June’ release, Leopard has been pushed back until October.

This is a huge bummer, because I’ve been waiting to do some hardware upgrades until Leopard is released. Looks like I’ll be waiting a bit longer. :( 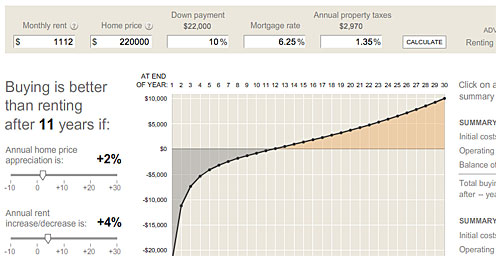 The NY Times has published an awesome, interactive guide for determining the financial benefits of buying, or renting a home. Basically, you put in all the relevant information, and it can give you costs for each year you are in the house, and at what point it becomes better to have bought, over renting. Of course, the numbers it gives are based on averages. It may not reflect costs specific to your area, but it’s still a good data point.

In order to access the guide, you’ll need to sign up for a NY Times account. It’s free, and only takes a minute. It’s time well spent if you’re thinking about moving.