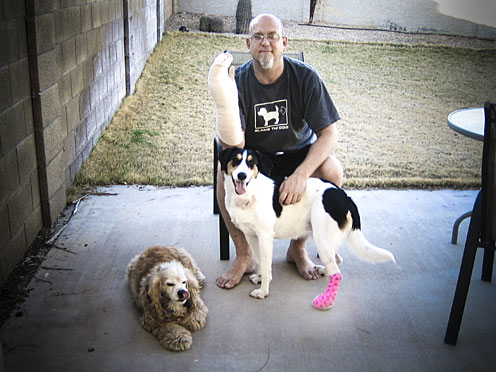 Well, you may have noticed that there hasn’t been much activity around here lately. I’m not just being lazy. There is a reason for my absence, and the picture above will give you a little hint.

Maggie (our dog) and I were attacked by a Pit Bull while visiting Phoenix. We’ll both be OK, but we’re going to be recovering for a while.

I’m not sure where to begin, so I’ll just start from the top. Maggie and I drove to Phoenix on March 1st. We came down to attend the Ninth Annual Los Dos Molinos Hike, on Saturday, March 3rd. We hike from a friend’s house, over South Mountain, and end at a mexican food restaurant called, Los Dos Molinos (home of the world’s greatest margaritas). I planned to stay for a few extra days for a friend’s birthday, and drive home on Wednesday, March 7th.

On the morning we were supposed to leave, I had the car mostly packed, and I was going to take Maggie out for one last walk before hitting the road. At the same time, my friend’s neighbor, from across the street, was coming out of her house with her three big dogs (two German Shepherds and a Pit Bull). Maggie and I had just walked out of the house, and were in my friend’s front yard, when the neighbor’s dogs spotted us… broke away from the woman… ran across the street… and attacked Maggie. It all happened very suddenly, without any warning at all.

Fortunately for us, the two Shepherds didn’t really participate once the attack started, it was just the Pit Bull. If all three had attacked, I don’t think I would be here to tell the story. I won’t go into the graphic details of the attack, but I will say that it was one of the most intense (and terrifying) experiences I have ever gone through. While it was happening, I thought there was a good chance that we weren’t going to survive.

I did finally get the Pit Bull off of Maggie, and we retreated through the gate into my friend’s back yard. I had to quickly wrap paper towels around anything that was bleeding (on both of us), and jump in the car to get Maggie to the animal hospital, where she immediately had surgery on her leg and neck.

I initially thought my injuries were limited to scrapes, scratches, and a small bite, but I would later find out that I had a serious break in one of the bones in my right hand, and some tendon damage. I had to have surgery too. They put metal plates and screws in my hand.

So, here we are… still in Phoenix. We’re going to be OK. We just need a little time to recover before we can drive home. My friends have kindly allowed us to stay as long as we need to. Thanks Todd & Steph!

Although my friends have been very gracious, and I am thankful that things aren’t worse, I have to admit that I just want to go home. I miss Anne Marie. She actually came down for the hike too, but she flew because she could only take the weekend off. Unfortunately, she can’t fly down, and drive us home because she can’t drive stick.

I have a followup with the surgeon on Monday. We’ll see how things are doing, and when I might be able to go home.

I haven’t really been feeling up to blogging until now. Partially because of how I’ve been feeling, both physically and emotionally, but also because it takes freakin forever to type anything with my left hand. I may try to catch up now that I’m feeling a little better.

So there you have it… the short version of the story. The long version would be pages and pages, and take me a month to type. I’m sure there will be a couple of common questions that pop up in the comments, so I’ll try to answer those now…

Although this has been a terrifying experience, I just try to keep reminding myself that Maggie and I are still alive, and we should make a full recovery. It could have been a lot worse. I’m also thankful to be surrounded by good friends (both near and far) who are helping me get through this.

31 thoughts on “Call Me Lefty”