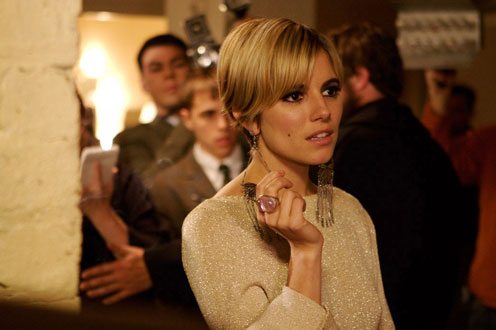 Over the weekend we saw Factory Girl. It’s the story of Edie Sedgwick, one of Andy Warhol’s players at the infamous factory, in the mid-sixties.

The film’s three main characters are played by, Sienna Miller (Edie Sedgwick), Guy Pearce (Andy Warhol), and Hayden Christensen (Musician). Although Hayden Christensen’s role is being referred to simply as, “Musician”, he is meant to be legendary folk singer, Bob Dylan. Apparently there has been some brewing tension (and possible legal action) between Dylan and the film’s producers. The character was never referred to by name in the film.

I thought the movie was made fairly well, and all the actors gave good performances. But, I would have to say Factory Girl is only mildly entertaining. It doesn’t really go very deep into the story, and in the end it’s pretty much what you would expect from a, girl goes to the big city, gets involved with artists and drugs kind of story. There’s nothing really new in Factory Girl.

Although I wasn’t blown away by the film, I wouldn’t discourage anyone from seeing it. I would just say go in with reasonable expectations.