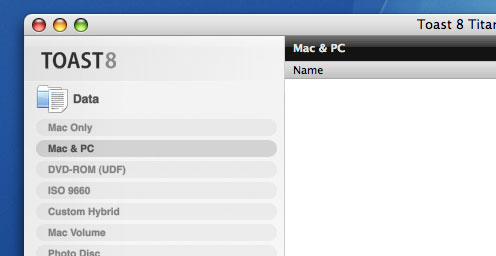 At this year’s Macworld, Roxio announced Toast 8 Titanium, the next major version of their industry standard CD/DVD burning software. It has a lot of great new features, and I think it’s definitely worthy of upgrading. I’ll go over some general new features, and then hi-light what features most appealed to me.

The first thing you’ll notice when launching Toast 8, is it has a completely new interface. It’s not as though Toast 7 was hard to use, but they’ve definitely streamlined and simplified things in Toast 8. Personally, I like it. It’s much cleaner. 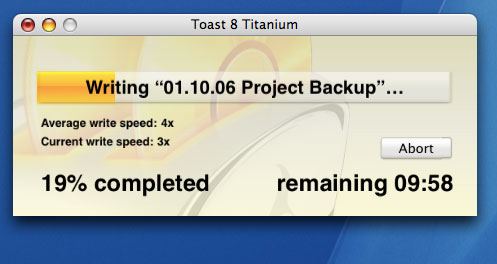 One other nice feature about the new interface, is when you click Burn, the entire window minimizes into a small status window, that’s easier to move out of the way, and still monitor your disc.

Two of Toast 8’s biggest features are actually things I personally don’t care about, but they’re worth mentioning. First, Toast 8 will burn Blu-ray DVDs, if you have a Blu-ray burner that is. Second, it can pull content from your Tivo (or Elgato EyeTV) and either burn it to DVD or export it to iPod/PSP formats. I don’t have Blu-ray, Tivo, or EyeTV, so these features weren’t high on my must-have list.

The next big feature is for you audio pros out there. Roxio rolled many of the features from Jam, into Toast 8. If you’re unfamiliar with Jam, it’s Roxio’s tool for minor audio editing, and music CD Mastering (for replication). I’m not certain, but Roxio may have discontinued Jam as a stand-alone product. I can’t find it on their site anymore.

OK, now for the features that I upgraded for. First is Disc Spanning. This was a feature first introduced in Toast 7. It allows you to back up large amounts of data, and Toast will automatically span multiple CDs or DVDs. Toast 7 had a limitation of only doing this for Mac-only discs. Toast 8 will span discs for both platforms. What’s great about Toast’s spanned discs, is it doesn’t just divide the files across multiple discs (like other utilities), it can actually break up a single file, and write it to multiple discs. This is great for backing up video clips, as they are often too big to fit on a single disc. It also just makes archiving a lot of data much easier, since you don’t have to break things up in small chunks. 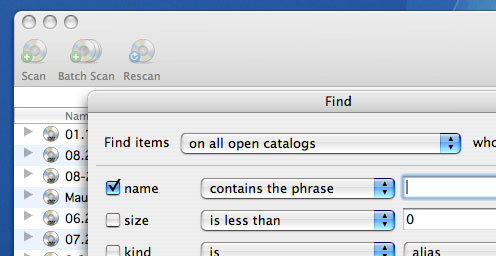 The other feature that I’ve wanted forever is disc cataloging. Every time you burn a CD or DVD, it’s contents are automatically added to a searchable catalog. You can also add old discs to that catalog as well. This makes files much easier to find later. I’ve been meaning to use some sort of software to catalog my hundreds of archive discs forever. Now I can.

The catalog software is actually a free-standing app, that’s bundled with Toast. It’s a version of DiskCatalogMaker, by Fujiwara Software. Without having tried very many cataloging apps, I can’t say if this is the best one out there, but so far it’s worked very well for me. And, it has the big added bonus of being integrated with Toast, which will save you a step every time you make a backup.

DiskCatalogMaker doesn’t just catalog your CDs and DVDs. It can also catalog external drives, zip discs, and any other type of removable media. This can come in handy if you keep files on an external drive, but don’t always have it connected. You can search the drive, without connecting it first.

One other thing I’ll give DiskCatalogMaker, is it’s extremely fast. It will read discs burned with any software, but if you burned your past CDs with Toast, it seems especially fast. I’ve had it catalog an entire data-DVD in less than 1 second. It’s amazing! 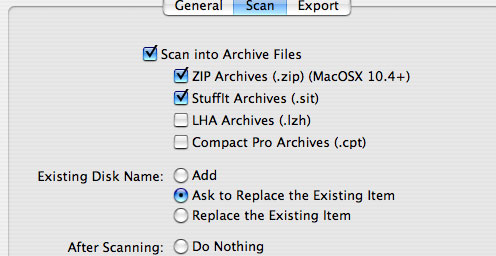 if you use DiskCatalogMaker, I do recommend changing some of the default preferences. First, I would check “Scan into Archive files”. It’s unchecked by default, but I personally think that files will be easier to find later, if your catalog has scanned all the files, including those inside of archives. Second, by default if you put a disc into your computer that has already been cataloged, DiskCatalogMaker will add it again to your catalog file (without asking). This seems like a stupid thing to have enabled by default. I doubt most people will want to have the same disc cataloged multiple times. I changed it to “Ask to replace the existing item”. The resulting dialog box gives you the option to do nothing if you don’t want the disc scanned again.

Those are the features that stood out for me, but go here to check out everything Toast 8 has to offer.

UPDATE (1.28.07): The MacCast has a nice write-up on the TivoToGo functionality of Toast 8. LINK

1 thought on “Toast 8 is a Solid Upgrade”