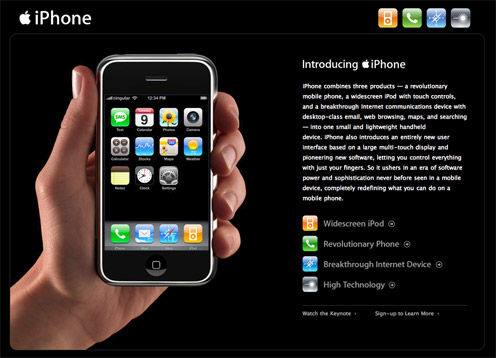 HOLY CRAP! I’ve been reading the live coverage of the Macworld keynote over at engadget, and I’ve almost wet my pants!

The iPhone is real! It’s a wide-screen iPod, phone, camera, and who knows what else, all in one. AND… it runs OS X!

I’m going to the Apple store! (I hope they have them)

Well, the Apple store didn’t have them. In fact, the store employees were reading live coverage of the keynote on the web too. They didn’t know what was coming out either.

It turns out the iPhone is still awaiting FCC approval, and is expected to ship in June, here in the States (Europe in fourth quarter, Asia in 2008). Apple only announced it today, because they didn’t want the FCC to announce it.

What’s the price? It will be $499 for a 4GB model, and $599 for an 8GB model, and be on the Cingular network. As a phone/PDA, those sizes are pretty darn good, but as a video iPod, 4GB and 8GB are pretty tiny. I’m kind of surprised they are so small. I’m not disappointed though. Although it would be nice to combine the devices, I was just hoping for a good phone/PDA (not an iPod), and that’s exactly what we got. Although, considering that the iPod functionality is pretty limited due to capacity, $499-$599 is pretty steep for just a phone/PDA.

Regardless, I’m totally jazzed about the new iPhone. I can’t wait for it to come out.

I just came home to grab some lunch, and then I’m off to the expo. I’ll be commenting more about all this later today.

4 thoughts on “iPhone is real!”