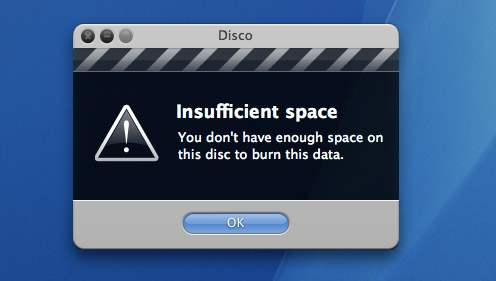 There is a new CD/DVD burning application for the Mac, called Disco, that has been getting a lot of attention lately. It actually looks very cool, so I started to wonder… Is Disco a Toast killer? Unfortunately, the answer is NO… at least not for me.

Now, Disco is currently in public beta, so some of these items may change in future releases.

One of the features in Disco that I was most interested in is, Spandex. It allows you to make a backup across multiple CDs and DVDs without manually breaking up your files in appropriately sized chunks first. You just select everything and hit go, and Disco is supposed to segment everything for you. Toast 7 has a similar feature. They just call it disc spanning.

Unfortunately, Toast does this well, and Disco doesn’t. Toast has the ability to span a single file… meaning if you have 1 file that won’t fit onto a single CD or DVD (like large video files), Toast can actually segment that single file onto multiple discs, and then reassemble it later. It’s extremely handy. Unfortunately, Disco can’t do this. If you try to burn a file that won’t fit onto a single disc, you just get an error message that says “Insufficient space”.

Disco can span smaller files and folders across multiple discs, but in my testing, it showed a very inefficient method of doing this. In some cases, there were actually hundreds of megs of space left on the CD it was burning when it kicked it out and asked for the next CD. It did this to maintain a certain folder structure. But, there are better ways of going about this, and Disco’s method is pretty wasteful. Depending on your folder structure, you could end up using a lot more discs than are necessary for you backups.

For my work, I need to burn a lot of hybrid discs (Mac and PC). With Toast, you have the ability to configure which files will be visible on the Mac side, and on the PC side, individually. I need this functionality because I’m building CD-based presentations that should only show the appropriate files to the corresponding platform. While Disco does burn hybrid discs, it give you no control over visibility of files. Both platforms can see all files.

The next feature I was interested in was, Discography. It’s a built in cataloging feature that will keep track of everything you burn, making it easy to go back and search for files later. Unfortunately, it isn’t working, at least not on my machine (admittedly, this is beta software). If this ends up working well, it’s a big plus for Disco. But, so far I haven’t seen any documentation on if they will be allowing you to catalog discs that have already been burned with another application. If they don’t add this capability, then this feature isn’t very useful, at least not to me. I already have hundreds of backup discs. I need them to all be cataloged under one tool, otherwise it’s just not an efficient workflow.

Disco has the potential to be a really nice application. But, currently it biggest appeal is its looks and eye-candy (it’s a beautiful app). It’s actual feature set isn’t really anything all that special. You can get much of it’s functionality through the built in tools in OS X, or through a free alternative, like Liquid CD. If you need more burning power, then Toast is still your best bet.

9 thoughts on “Is Disco a Toast Killer?”