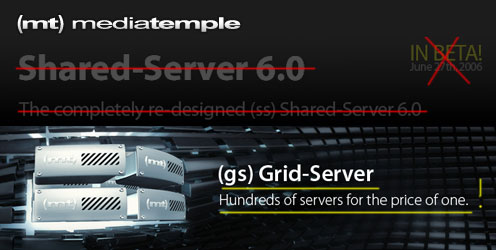 Three months ago I moved this site to Media Temple’s Shared-Server (ss) package. It wasn’t all I wanted it to be, but at that time they were beta testing their new and improved Shared-Server (ss6), which had the features I wanted. Sometime between then and now, they dumped the idea, or at least the name, Shared-Server, because when their new system recently came out of beta, it was renamed Grid-Server (gs).

I’m going to be writing about the experience of migrating my site from the Shared-Server to the Grid-Server… what worked, and what didn’t. But first, here’s some of the basic differences between the two packages (simplified). Media Temple’s Shared-Sever was much like everyone else’s shared server packages. Basically, the websites being hosted don’t have a server (hardware box) of their own, the hosting company puts your website, and X number of other sites on a single box. That box is then put into a room with other boxes that also have X number of sites on them. Even though they may be placed together, each box runs independently. This is the most common type of hosting for small to medium sized sites, because it’s the cheapest.

The biggest downside to shared hosting is you don’t have much (or any) control over what server you are put on. If you’re lucky, and you share a server with only small sites that don’t get much traffic, you probably won’t have much trouble. But, if you are put onto a server that is being taxed by to much traffic, either from your own site, or others, you can start to have a lot of problems. And, if one of the sites on your box should cause the server to crash, your site will go down too.

Media Temple has hopefully reduced these kinds of problems with their new Grid-Server. Essentially, it’s still a shared sever, but instead of each box running X number of sites independently, they’ve connected all the boxes into a “grid”. Your site is essentially running on many, or all, of the boxes simultaneously (instead of on just one box). Theoretically, this will have some great advantages over traditional shared hosting. Since all the sites being served are running on all the servers, the system can better absorb sudden increases in resource usage or traffic from individual sites, and individual boxes can crash without affecting the rest of the grid.

A few months ago I ended up on digg.com, and had a sudden increase of traffic. In order to prevent my site from crashing the server, my host deactivated my account. Theoretically, this kind of thing wouldn’t happen under the Grid-Server, because it is supposed to be able to absorb those sudden spikes in traffic, without adversely affecting anyone else’s site. We’ll see if that is really the case.

I won’t go into the other new features of the Grid-Server right now. But you can get details on the package over at Media Temple if you’re interested.

At some point Media Temple will be transitioning all current Shared-Server clients over to the new system, but you can do it now if you don’t want to wait. Unfortunately, the new Grid-Server costs a fair amount more than their old Shared-Server. It’s now $20/mo. or $200/yr. If you are an existing Media Temple customer, you can opt for the Grid-Server Lite package. According to Media Temple, the price will be based on what you are currently paying for your Shared-Server package. In my case, the price was slightly different, but not enough for me to cause a fuss. My new price is $10/mo or $100/yr. I’ll be going over the differences in the two packages in part II of this story. Unfortunately, the Lite package isn’t available for new Media Temple customers… You’re stuck with the $20/mo, $200/yr price.

3 thoughts on “Migrating from Media Temple’s Shared-Server (ss) to Grid-Server (gs): part I”