Todays big Apple announcement brought with it iTunes 7.0. It has some awesome new features. Here are some of the hilights:

The first thing you may notice when installing iTunes 7 is this dialog box. That’s right, iTunes will now automatically grab artwork for you when you add songs to your library. iTunes always had this if you bought songs from the iTunes store, but if you ripped your own CDs you were on your own. iTunes will now try to find that artwork for you. It can even search your library for any existing songs that don’t have artwork. A new menu item called “Get Album Artwork” has been added to the Advanced pull-down menu. As far as I can tell, you don’t do this on a single song or album basis. When you select ‘Get Album Artwork’, iTunes tries to grab artwork for all songs in your library that are missing it. So far, I can’t actually tell if this is working or not. When I select the menu item, iTunes tells me it is looking for 843 albums. It counts up to 843, and then does nothing. I’m not sure if this means that it couldn’t find artwork for these albums, or what. I’m also not sure if it found some artwork when I launched version 7 for the first time. It does seem like some of the albums that I didn’t have artwork for, now do. But, there are some albums that are brand new (like the new Red Hot Chili Peppers), that Itunes can’t find artwork for. That just seems odd. Maybe someone can comment on their experience with this feature.

The iTunes installer may prompt you to install a newer version of QuickTime. As of the time of this writing, that new version of QuickTime isn’t available on the Apple site or through Software Update. It looks like they may be playing catch-up over at Apple. The new version is only required to play the new video content from the iTunes Store, so it isn’t necessary to have it right away. QuickTime 7.1.3 is now available through Software Update. 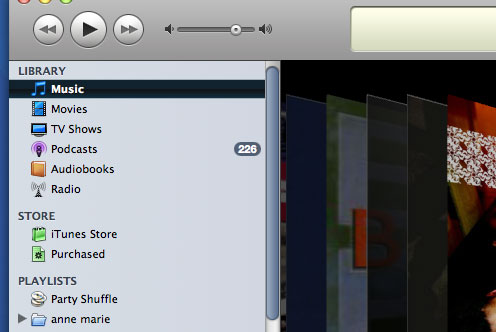 The sidebar has been redesigned giving more visual separation between your library, the iTunes Store, and you playlists. I like this new look, my sidebar always seemed like a bit of a jumble.

In addition to the new visual separation, Apple has given us more control over organizing our content. In iTunes 6, any video that you imported into iTunes that wasn’t bought from the iTunes store was automatically classified as “Movie”. You couldn’t change that. In iTunes 7, you can. I’ve ripped several TV shows from DVD, and now I can finally classify them as “TV Shows” and have them show up in the right list. Simply select the video in iTunes, and hit Command + i, and change the drop-down to “TV Show”.

Another welcome addition is podcasts no longer show up under “Music” when browsing you library by Artist. That always bugged me. 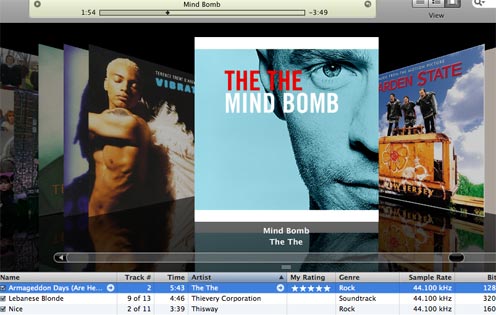 Browse by cover! That’s right, you can finally browse your library by album cover. They call this view “Coverflow”. You may remember a freestanding application by the same name, used for browsing your library. The developers site was updated this morning stating that the App was recently sold to Apple. Good for him! I bet that was a hard secret to keep.

tip: When browsing using coverflow for the first time, most of the albums will probably be represented by little musical notes (until you stop). It appears as though coverflow isn’t totally building the covers on the fly. I think it’s caching those covers, so it needs to draw them at least once before it can smoothly scroll through them. You may want to slowly scroll through the list, stopping frequently, to allow iTunes to cache the covers. You shouldn’t have to do this after the first time.

I think we’ve all been waiting for this view forever. I’m so glad Apple finally chose to incorporate this. In addition to coverflow, there is also a more standard album cover view mode that is more list based.

Apple has removed the “Browse” button from the upper right corner of the iTunes window. The classic 3 paned browse view isn’t gone, it’s just turned off be default. When in list view, go under the View pull-down menu and select ‘Show Browser’. Your list view will look just like it did in iTunes 6. 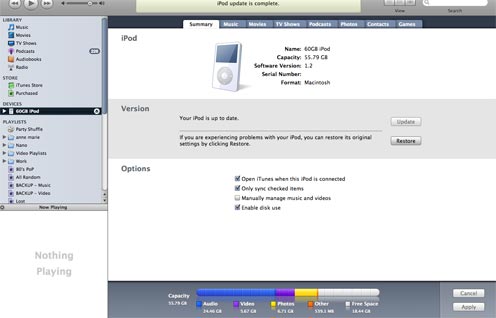 The way you manage you iPod syncing got a radical redesign. Your settings are no longer located in your preferences. Instead you get a whole section to play with when your iPod is connected. There are different tabs for managing different items, and you get a handy status bar indicating exactly how much space each type of media is occupying.

There are a couple of things to note here. I had my contacts and calendars turned on in iTunes 6. They were turned off in iTunes 7 by default. All of my videos were removed from my iPod when I did my first sync. Previously, I had only selected playlists set up to sync. It was still set up that way in iTunes 7, but all the playlist that I had checked, were now unchecked.

One other thing worth noting… when I upgraded from iTunes 6 to iTunes 7, this checkbox, that was previously checked, was unchecked by the installer. I want this turned on, so I had to go turn it on again in the preferences. It’s probably worth going through all of your preferences to make sure things are the way you had them before.

Overall I think iTunes 7 is a solid upgrade. Apple made some much needed changes.