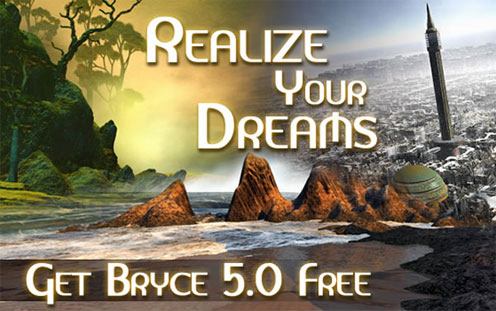 If you’re unfamiliar with Bryce, it’s an application for creating 3D landscapes. It’s available for Mac and Windows.

Between now and September 6th, 2006, you can get version 5.0 for free, without any restrictions. Version 5.0 is the older version, they are currently on 5.5, and I believe they are going to be releasing v6.0 in the not to distant future.

They have a note on the site that says “Bryce 5.0 does not run under Mac OS X Tiger (Mac OS 10.4 and above).” I think what they meant to say is that it does not run WELL. The application did launch, but behaved strangely, and in my limited testing I wasn’t able to export the image. If you’re running 10.4, use at your own risk.

tip: The Bryce 5.0 download comes as an old Stuffit Archive (instead of .zip). You’ll need Stuffit Expander (Free) to open the archive.