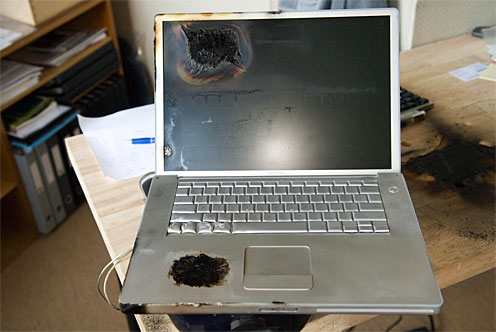 If you haven’t heard, Apple is recalling 1.8 million batteries for G4 iBooks and Powerbooks, sold between October 2003 and August 2006, because they pose a fire hazard. These are the same batteries, made by Sony, that were recently seen blowing up Dell laptops.

Affected customers can contact Apple at (800) 275-2273 between 8 a.m. and 8 p.m. CT Monday through Sunday or log on to Apple’s Web site to check the battery’s serial number and request a replacement battery.

Unfortunately, my iBook battery falls within the range of recalled units. I guess I won’t be taking my laptop anywhere for a while.

You can get the whole scoop over at AppleInsider.

UPDATE: I just tried to apply for the replacement online, and even though my battery does fall within the affected range, the online form says it’s not a valid number. I called Apple about it. They told me that the online form is wrong. They are experiencing technical difficulties with the servers (probably too much traffic). They asked me to try again later… they weren’t able to do it over the phone. If you’re having trouble with the form, don’t bother calling Apple just yet… try the form again later tonight or tomorrow.

UPDATE #2 (8.25.06 morning): The online form still doesn’t recognize my serial number, and now I can’t even get through to Apple on the phone. If I get connected at all, I get disconnected before speaking to anyone. This is getting very annoying. I want to start this process ASAP, because the Apple support page says it may take 6-8 weeks to get the replacement. Get it together, Apple!

UPDATE #3 (8.25.06 evening): So, the form is still saying my battery doesn’t qualify, even though it falls within the number range listed. I was finally able to get a hold of Apple, and I’m now being told that the number range is a rough guide to let people know that they should check with Apple, but not all numbers within the range are being recalled. They are saying my specific battery number is fine. While this explanation makes sense, I am extremely suspicious. I’ve read several reports of people having the same trouble I’m having with the form, but eventually the form accepts their battery number. I’m not quite ready to accept Apple’s explanation yet. It looks like I’ll be following up on this on Monday :(

UPDATE #4 (8.26.06 evening): This should be my last update on this subject. It appears as though I was told the truth on my last call to Apple… Not all serial numbers in the range are being recalled. Apple has finally updated the serial number range on the site from “6C519 – 6C552” to “6C519 – 6C552 ending with S9WA, S9WC or S9WD”. Mine ends S9ZD, so it looks like I’m OK. They also added some ending digits to the 15″ Powerbook range. Why, oh why didn’t Apple list it this way from the beginning. It would have avoided a lot of confusion and headaches.