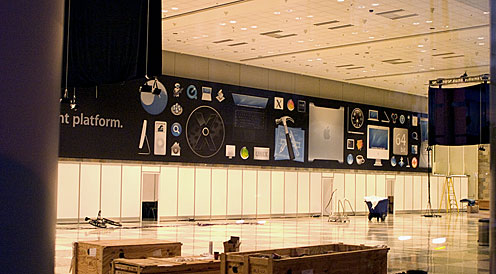 Here’s some pictures I took of the Banner hanging over at the Moscone Center for the WWDC, 2006. It went up today. We’ll have to wait until Monday, for the conference to start, before we find out about all the new goodies, but I think this banner may provide some clues.

They also have some large banners hanging from the ceiling, but they are covered. Could these be the new iChat Mobile? The anticipation is killing me.

UPDATE: a video of the iChat Mobile has surfaced on YouTube. You be the judge on how real it looks.

UPDATE #2: Holy Crap! When I posted this picture, I thought it would be popular, but I didn’t think it would totally bring my site to it’s knees! The image was picked up by digg, engadget, gizmado, cult of mac, TUAW, AppleInsider, and a ton of other sites. It was a little too much for my host to handle… they pulled the plug, and I was none to happy about it… but that’s a story for another post. The site is back up now (obviously), and I’ve moved the original image (and added 2 more) over to flickr.

UPDATE #3: Aaron, of mcmacsite.com, asked if I could go ahead and post everything I have, so… I did. There are 5 new images in the Flickr set. Although, they don’t really show anything new. I was hoping to head over there this afternoon and see if anything new has gone up. Happy speculating.

UPDATE #4: I just walked by Moscone. They’ve put up the finishing touches on the interior, but there is nothing new to see. I think these are all the clues we’ll be getting until announcements are made Monday morning.