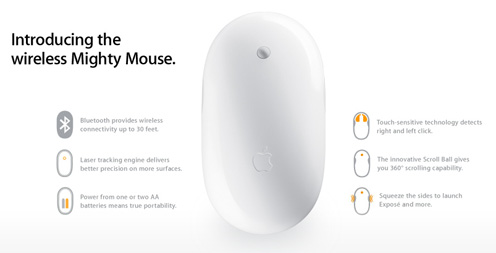 Yesterday brought renewed rumors of Apple releasing a wireless version of its Might Mouse, and today its a reality. Thats one of the quickest rumor-to-fact cycles I’ve seen.

I just have one thing to say… its about damn time. The original Might Mouse was released a year ago. I actually expected the wireless version within 3 months.

I haven’t played with one in person yet, but from the picture it look identical to its wired counterpart. If that ends up being the case, I may pass on this. The original Might Mouse had some issues that I didn’t like. I’m also not too sure about its $69 price tag. That’s just a bit more than I normally like to spend on a mouse.