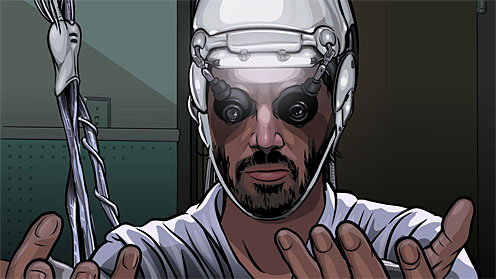 On Friday we saw A Scanner Darkly. I was a little disappointed, but I went in with fairly high hopes.

At times, the film moves along at a pretty slow pace. There were some long conversation scenes that became tedious very quickly.

At first I thought the cast looked great (Winona Ryder, Woody Harrelson, Robert Downy Jr., Keanu Reeves, Rory Cochrane), but in the end, they all played exactly the character you would expect them to play. They were the kinds of roles that these actors could have done in their sleep.

If you are unfamiliar with the movie, it’s rotoscoped. The film is processed in a way that makes it look like animation. I was really excited about seeing this, but about midway through the film I started looking at this as more of a gimmick. It’s almost as if they used this to distract you from an otherwise mediocre movie.

I wouldn’t discourage someone from seeing this film, but I wouldn’t really recommend it either.

3 thoughts on “A Scanner Darkly”