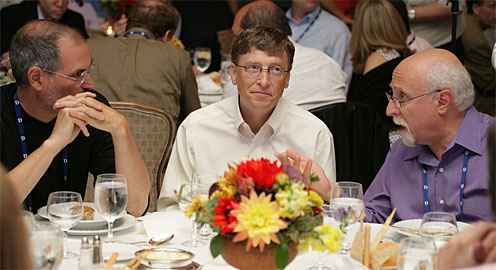 Oh how I would have loved to be sitting at this table. From left to right, that’s Steve Jobs, Bill Gates, and technology columnist, Walt Mossberg. They all sat together for a snack at the D4: All Things Digital conference. What do you think they are talking about?

There are many other photos in this gallery (multiple pages), in some of them Steve and Bill seem to be having some laughs. Maybe they aren’t the mortal enemies that we always assume.

UPDATE: Someone calling themselves Walt Mossberg left a comment on this post, with a correction… these photos were actually taken at the D3 conference, in May, 2005. I’ve confirmed that these were taken at D3, but now the only question is, was that really Walt Mossberg visiting my humble little blog? If it really was you, Walt, I’ll casually say… Thanks for stopping by, please come back again (while I think to myself… That’s so freakin cool! Walt Mossberg read my blog!). Alternatively, if that was some prankster out there, I’ll say… you suck! (as I think to myself… You Suck!).