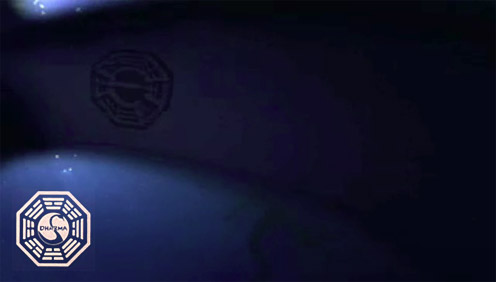 If you read this blog, you probably know I’m a big fan of the TV show Lost. There have been 2 episodes that have almost hidden images in them, at least that I’ve noticed. There’s probably more. They aren’t exactly hidden, but they happen so fast (sometimes just one frame), that they would be almost impossible to see when watching them on TV. I have the downloaded movies from iTunes, so I can go back and watch them frame-by-frame whenever I see something weird. I thought I would share a couple of those with you.

If you haven’t started watching season 2, you may want to stop reading now. If you are past episode #10, in season 2, then you have already seen these, so you’re OK.

In season 2, episode 2 (“Adrift”), Michael and Sawyer are floating out in the ocean on their destroyed raft. A shark is swimming below them. In one quick scene we see the shark from below as it swims by. The underside of the shark has a tattoo near it’s tail fin. It’s very similar to the “Dharma Initiative” symbol. It’s similar, but with some distinct differences. What does it mean? I have no idea.

In Season 2, episode 10 (“The 23rd Psalm”), Mr Echo is confronted by “The Creature”. As he stands face to face with it, we pan around him, going through the smoke… several images appear in the smoke (10 by my count). Each one is only on for one frame, so they are impossible to see without watching them frame-by-frame. Even then, some of them are unrecognizable. I have links below for all 10 images. Hint: with the images open, you can push ‘p’ or ‘n’ on your keyboard to go to the previous or next image.

If you’ve seen more, let me know… but NOT if they are later than episode 10 of season 2. That’s as far as we’ve gone… so don’t ruin it for me.

9 thoughts on “Hidden Images in Lost”