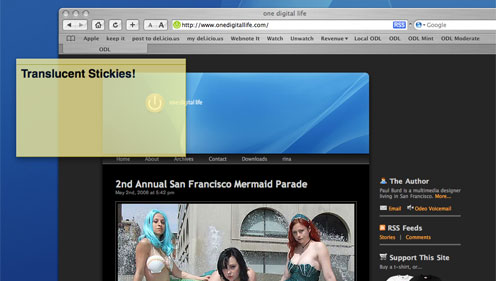 I’ve always been a big fan of Apples ‘Stickies’ application. It’s been around forever. I think they were first introduced in System 7, but I’m not sure about that. In OS X 10.4, Tiger, Apple gave us a Widget version of Stickies, but I just don’t like those as much. They seem a little buggy.

Anyway, I never realized you can make your Stickies translucent. Just hit Command-Option-T, and the active note will become translucent. Hit the key combination again to return the note to full opacity.

Found via Apple’s Tip of the Week