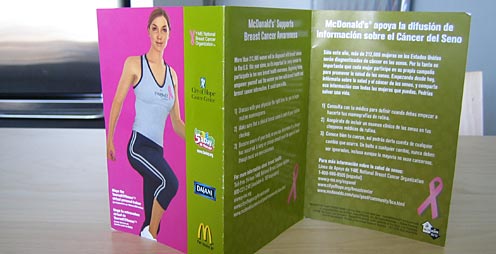 I’ve long held the belief that as time goes by, and it gets easier and easier to create realistic looking 3D people, we’ll see more and more of them used in media in place of a real person. I see this happening in all media… print, TV, film, etc…

I had a minor affirmation of this belief today. I had lunch at McDonalds. When I sat down at a table to eat my meal, I noticed this card. At first I didn’t give it a second thought, but after a quick double-take, I noticed this is not a real woman. “She” is a 3D fabrication.

Instead of this being an expensive photo-shoot with a real model, photographer, and a half dozen assistants, it was probably one lone-designer sitting in his home office (in his underwear) with a copy of the Adobe Creative Suite and Poser.

Mark my words, this is only the beginning. Some day soon you’ll have to look twice at that Victory Secrets catalog you have hidden in your night stand.

3 thoughts on “The future of real people?”