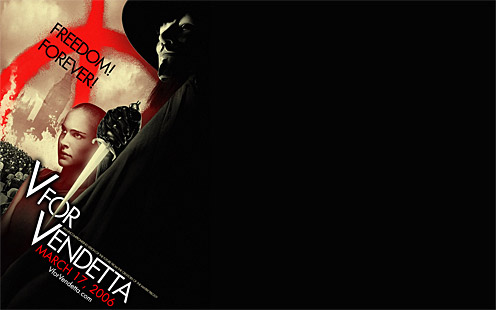 Tonight we saw V for Vendetta. It was awesome!

I actually had no intention of seeing this movie. The few little bits I had seen didn’t look very good. I had also heard that there were a lot of delays in getting the film done, which can often be a sure sign that a movie sucks. But, I happened to look at this review in the SF Gate, and I decided to give it a chance:

“This futuristic story set in a totalitarian England is richly satisfying entertainment the way movies are at their best, when they prod you to think. Natalie Portman gives her strongest performance yet as an orphan who slowly comes to understand the truth behind the deaths of her family. She’s recruited by a terrorist who goes by “V” and who intones long-forgotten principles of democracy. Written by “Matrix” creators Andy and Larry Wachowski, this is inflammatory filmmaking with the burners turned up high.”

I’m so glad I did, because the movie was really good. I totally agree with the reviewer. This film was highly entertaining. I recommend seeing it while it’s still on the big-screen.

I must say that I’m really impressed with the Wachowski Brothers. There has only ever been two films with scenes that totally surprised me (that I can think of), and they are behind both of them. In The Matrix, I was stunned when Neo first woke up in the ‘pod’, and we got a picture of ‘reality’. I totally didn’t see that coming. In V for Vendetta, it was when…. xxxxxxxxxxx.

3 thoughts on “V for Vendetta”