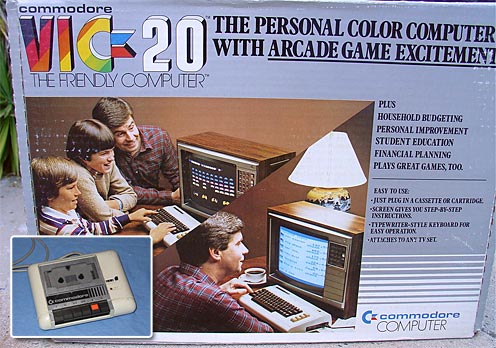 In my last post I mentioned the first Mac I ever owned was a lime green iMac. That post sent me wandering down memory lane a bit.

The first computer I actually owned was a Commodore Vic-20. It was released in January of 1981. It had a supercharged 1 MHz processor, and a whopping 3.5K of RAM. Of course it was expandable to 64K of RAM through the use of a brick-sized cartridge that plugged into the back. You stored all your data on cassette tapes.

The Vic-20 was replaced in 1982 by the Commodore 64. It had 64K of built-in RAM, and in addition to the cassette drive, could store data on an optional 5.25″, 170K floppy drive. The tagline on the box was The Personal Computer with Professional Power… which just makes me laugh now.

One thing that younger computer users may not realize about these old machines, is they had no hard drives. If you turned them off without first saving your work to either cassette of floppy, it was gone.

“Next came the Commodore 64 (1982), almost certainly the best-selling computer model of all time. Ex-Commodorian Andy Finkel estimates that sales totaled between 17 and 22 million units. That’s more than all the Macs put together, and it dwarfs IBM’s top-selling systems, the PC and the AT.”