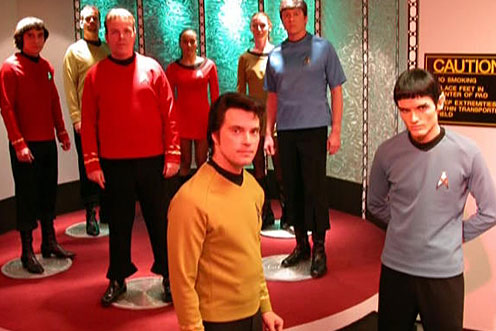 Anyone who knows me, knows I’m a big Star Trek fan. The other day I came across a site called New Voyages. They are producing new episodes, of classic Star Trek. They’ve only done a couple of episodes, but they actually have Walter Koenig (Chekov), and George Takei (Sulu) signed up for future episodes. You can see a preview of Walter’s episode on YouTube. They also have D.C. Fontana as one of the writers. Fontana was a writer and major influence on the original show.

They are making the episodes available as free downloads, but unfortunately, they are primarily in wmv format, and somewhat unorganized.

Here’s some info from their FAQ:

“The new show will be the continuing voyages of Captain Kirk and the crew of the U.S.S. Enterprise, NCC-1701 as seen in the 1966-69 television series, Star Trek. The series was cancelled after its third season. We are restarting the series as if it were in its fourth year.”

“The idea for creating a new series based on the original Star Trek first originated in 1997 with James Cawley. James worked with original series and Next Generation costume designer, William Ware Theiss. Over the years James has amassed a huge collection of set pieces, props and costumes with one goal in mind: reclaiming the spirit of Trek. Max Rem joined the dream with his artistic talents and together the co-producers have put together a team that has brought back the Roddenberry spirit, ideals and philosophy to Star Trek.”

“Our ultimate goal is to produce a full year’s worth (22 or more) web episodes per year maintaining Gene Roddenberry’s philosophy and vision for the original 1960’s television show. We believe in challenging people’s thoughts and enticing them to action. We feel that Star Trek is a great vehicle for exploring the human condition. We plan to devote the series to commenting on the current condition of life on Earth in the 21st century.”