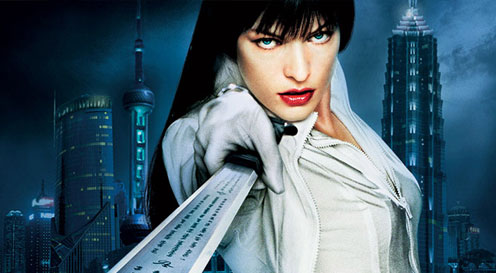 Milla Jovovich kicks ass as Ultraviolet… That’s what I had hoped to say after seeing the movie tonight. Now that I’ve seen it, my comments are less about kicking ass, and more about sucking ass! Ultraviolet is the worst movie I’ve seen since… since… well, there must be something worse… I just can’t think of it at the moment.

Here is an excerpt from the official synopsis…

“Set in the late 21st century, a subculture of humans called hemophages has emerged who have been genetically modified, giving them enhanced speed, incredible stamina and acute intelligence. To the government’s dismay, more and more of the population are being transformed, and they have set out to rid the world of this new subculture that they deem menaces to society…”

That sounds pretty cool, right? It’s too bad this isn’t the actual story. It is true there is a group called hemophages, but never once does the movie refer to them as “genetically modified, giving them enhanced speed, incredible stamina and acute intelligence”. In the beginning of the movie the hemophages are said to have a disease, caused by a virus… and that’s all that is said. About an hour into the movie, they start calling the hempphage’s vampires, and they have the pointy teeth to prove it. Ummm… vampires? That’s not in the synopsis? It’s as though no one was quite sure what movie they were making.

Don’t get me wrong, I went into Ultraviolet thinking it would probably be pretty bad, but I’ll take sci-fi where I can get it. However, I didn’t think it was going to be the suckiest movie that ever sucked. I at very least though it would have some cool fight scenes, and visual effect eye-candy, that would justify my time and hard earned cash… NOT! The fight scenes were terrible, and the majority of the effects were unimpressive, to say the least. Not even Milla Jovovich’s skin tight outfits could save this one. The story, acting, editing, and effects were all awful!

I dragged Anne Marie to this movie, and I’ll probably never earn enough points with her to make up for it. About an hour in I tried to leave, because I couldn’t take it anymore, but she said no. I think she wanted to punish me for making her go.

I really can’t think of one good thing to say about Ultraviolet, other than, by comparison… Ultraviolet makes Highlander II look like a masterpiece of sci-fi cinema.

Do yourself a favor and wait for Ultraviolet to come to TV… and then watch something else.

5 thoughts on “Ultraviolet: The suckiest movie that ever sucked!”