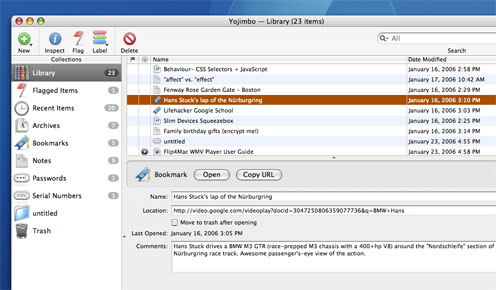 BareBones Software, makers of popular apps like BBEdit, TextWrangler, and Super Get Info, recently released Yojimbo. It’s been generating a lot of talk on Mac sites, so I thought I would throw in my two cents.

Basically, Yojimbo, which I believe is a Japanese word roughly meaning “Protector”, is software for organizing just about anything from serial numbers, to bookmarks, to files. The interface is laid out kind of like Apple’s Mail, with a list of collections on the left, items in the upper right, and content in the lower right. I think the idea is just like you organize music in iTunes, and photo’s in iPhoto, you could use Yojimbo for almost everything else.

I’ve only played with it a little, but so far it looks promising. The biggest feature that peaked my interest is it’s ability to sync using .Mac. I have been looking for a solution that would allow me to keep certain core info up to date on both of my machines. So far, my biggest complaint about Yojimbo is it doesn’t appear to be able to take in Excel files, or Apple Pages files. I’m not totally convinced that Yojimbo is the solution for me, but it’s a step in the right direction. Unfortunately, the solution doesn’t come cheap. A single-user license is $39.00. I personally feel it should be closer to $20. There’s a demo available on the site, so you can give it a try for yourself.