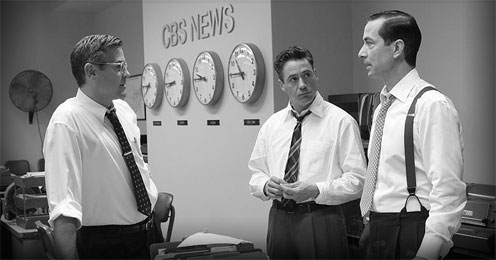 On Friday night we went to see Good Night and Good Luck. It’s the story of Edward R. Murrow, and a series of stories on CBS News in 1953 about Joseph McCarthy.

I really liked this film a lot. It was well written, performed, and edited. As an indication of its popularity, the film has been running non-stop in our local theater since it was released in October of last year, and it was still a packed house.

Good Night and Good Luck was co-written and directed by George Clooney. I personally have never been a big fan of Clooney in his younger days (Remember when he was on Rosanne?), but I’ve changed my mind. That guy really has some talent, and it shows in this film.

My only real criticism of the film would be that I felt it required the viewer to have a certain amount of knowledge about the McCarthy Era in order to get a true sense of the time. The film gave the basic gist of what was going on, but I didn’t think it had enough depth to accurately portray the scale of the witch hunt that McCarthy lead.

If this one is still in theaters where you live, I highly recommend checking it out on the big screen. If not, Amazon has it on DVD