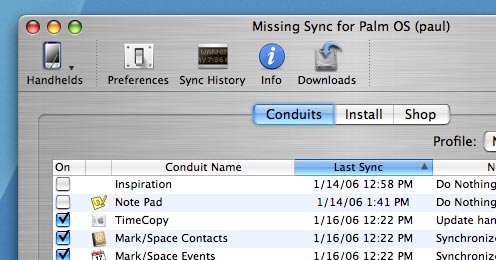 For quite some time now I’ve been very unhappy with how my Palm syncs with my Mac. So much so that I had stopped using it all together. I had constant problems with syncing… duplicate records, items not syncing, etc…

I had been considering trying The Missing Sync, by mark/space software for quite a while, and I was lucky enough to get a chance to talk them directly at Macworld this last week. I bought it at the show, and so far I am very pleased with it. It just works!

The Missing Sync works differently if you are running Panther or Tiger. Under Panther in works in conjunction with Apple’s iSync, but in Tiger in skips iSync all-together and works with SyncServices, an underlying technology built into Tiger. I’m running Tiger, so I can’t comment on how well it works under Panther. For me, everything has been working wonderfully so far.

One very nice feature of The Missing Sync is it makes your Palm Handheld use the categories you’ve set up in iCal, and the groups you have in Apple’s Address Book. Meaning, if you have a calendar in iCal called “Travel”, it puts a category on your Palm called “Travel”. That makes sense, right? Palm’s sync manager didn’t do anything like that, it just randomely chose categories for your events.

Another nice feature of The Missing Sync is you do NOT have to have Palm Desktop installed. Any Mac user can tell you that Palm Desktop sucks on the Mac. I was glad to get rid of it. When I installed The Missing Sync, it automatically deactivated Palm’s Hotsync Manager, removed my Palm from iSync, and set everything up for me within The Missing Sync. It was a relatively painless process to get up and running quickly.

If you’ve been unhappy with Palm Desktop / iSync, I would strongly reccomend giving The Missing Sync a try.