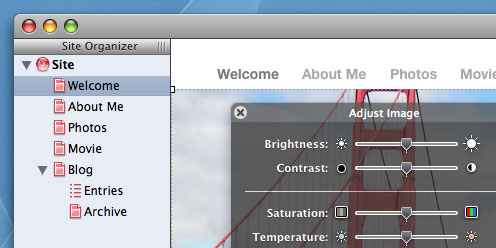 I finally had a chance to sit down and properly evaluate iWeb, Apple’s newest addition to iLife ’06. Overall I would give it a thumbs up, and I would call it a solid 1.0 release. But, there are some things you may want to know…

THE GOOD:
As with most things Apple, iWeb is pretty easy to use, most of the features are fairly intuitive. Without any real web knowledge, you could build a fully functional site relatively quickly.

iWeb plays well with other members of the iLife suite. You have full access to all of the media contained in iPhoto, iTunes, and Garage Band… in addition to being able to drag media directly from the finder into iWeb pages. You also have access to iPhoto’s image editing capabilities, which is a nice time saver.

If you are looking to join the blogging revolution, iWeb may be a good choice because it is extremely easy to get up and running quickly without any prior knowledge, especially if you have a .Mac account. I also think it’s easier for doing things like adding images to your blog posts, over some of the online services that are out there. However, there are some important considerations you should know. I will cover those later in this review.

Contrary to popular belief, you do NOT need a .Mac account to use iWeb. You can publish your site to a folder on your local drive and upload it to the server of your choice. I was pleasantly surprised to see that iWeb can still correctly build the XML files for the RSS feeds even when publishing to a folder. I thought that was going to be a .Mac only feature. When you publish to a folder, iWeb asks you for the URL of the final destination (your web server), and builds the XML files accordingly.

THE BAD:
iWeb uses templates to build your pages. Unfortunately, once you’ve built a page with a certain template, you can’t change it to another template. You have to rebuild the page. I didn’t like that at all. I wanted iWeb to be a little more flexible.

iWeb isn’t very good at compressing images. I had a large banner image at the top of my page that iWeb made into a 480k PNG. I could have made the same file look as good with a 50k JPG. So, iWeb sites may not be very dial-up / bandwidth friendly.

UPDATE: See this post for more information about better image compression in iWeb 1.0.1

If you are thinking about iWeb as a blogging tool, you should be aware that an iWeb blog has no commenting system (people can’t make comments on you blog posts). This is because there is no server-side back-end to your blog, to run that kind of system. As far as I can tell, iWeb simply republished static HTML pages whenver you make additional posts. Under this kind of system I don’t think there would be any way to add a commenting system to an iWeb blog. UPDATE (02.01.04): See this post for more information about comments in iWeb blogs.

This is a small item, but it annoyed me a little. If you watched the iWeb demo in the Macworld keynote, you saw Steve Jobs drag an iTunes playlist out of the iWeb media browser onto a page and it automatically built a list of links to those songs in the iTunes music store. That’s a great feature, but he didn’t tell you that you have to build the playlist in iTunes first. If you try to drag individual tracks from the media browser they are added to the page as media, rather than links. It would be nice to save that step.

THE UGLY:
I believe the code that iWeb writes is technically standards compliant. However, it is horribly structured and extremely redundant. It also puts in many things that just don’t need to be there. This would make it extremely difficult to go back later and edit an iWeb site in another text or web editor (other than iWeb). Unfortunately, this problem holds true for images as well. If you have an image that is used on every page of your site, iWeb will creat a unique copy of the image for every place it used, instead of just referencing it where needed. Coupled with how large iWeb graphic files tend to be, this makes for a lot of wasted time waiting for things to load.

IN CONCLUSION:
As I said at the beginning of this review, I think iWeb is a solid 1.0 release. It certainly has room for improvement, but it’s an easy to use, inexpensive tool that gives a lot of power to an inexperienced user. It’s not meant for web professionals, and shouldn’t be held to the same standards.