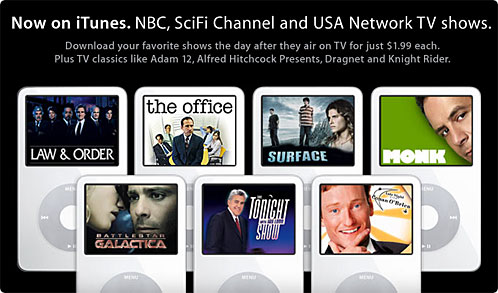 Apple and NBC Universal today announced a lineup of new primetime, cable, late-night and classic TV shows available on the iTunes Music Store. Some of the shows include Law & Order, Battlestar Galactica, Monk, and Knight Rider. iTunes now offers more than 300 episodes of 16 TV shows for viewing on a computer or iPod.

We are huge Law & Order fans, but luckily for us they are only offering the 1st season, and the current season… I would go broke if they offered all 16 seasons.