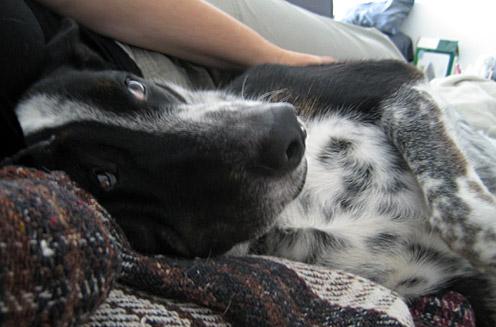 The last few days have been pretty rough for us. Our beloved dog, Emmitt, passed away Wednesday night. He was only eight years old.

Last week he developed what we thought was a minor illness. He was drinking a lot of water and was slightly bloated, but other than that he seemed pretty normal. The first round of tests that the vet performed revealed nothing. He went into the vet again on Wednesday morning for an ultrasound, it revealed that the bloating was blood. Emmitt was bleeding internally from cancerous tumors that had ruptured. He underwent emergency surgery, but it was unsuccessful.

We spent Wednesday night at the animal hospital, holding and comforting him until the end came. Our only comfort is that he did not suffer, the end came quickly.

Just two years ago, I lost my other dog, Booger. His passing was from old age, and was slow and painful. I remember thinking that it would be much better if it was from a single event, and happened quickly. I was wrong. Emmitt’s death came so suddenly, and unexpectedly, that we were totally unprepared. It’s been a devastating blow for both of us. I’m fighting back the tears as I write this.

Emmitt was a wonderful dog, and a treasured friend for many years. We loved him dearly. He will be missed.

18 thoughts on “Rest in Peace Emmitt”