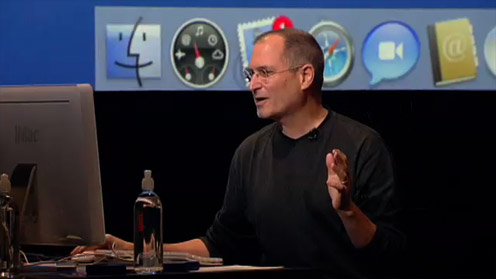 Apparently, Steve Jobs has been nominated for Time Magazine’s 2005 Person of the Year. At the moment, J.K. Rowling, Author of those Harry potter books is in first place. Personally, I think Steve has had a much bigger impact on our society. You can vote for Steve by going HERE. 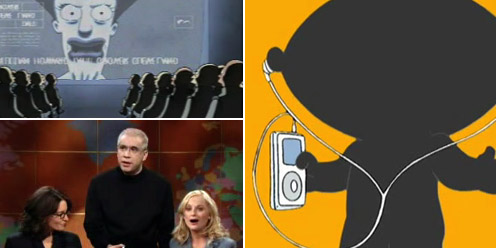 MacTV has had some great Apple parodies available on their site lately. Three of my favorites include an SNL Steve Jobs skit, A Futurama version of Apple’s 1984 ad, and Stewie’s (from Family Guy) iPod commercial.

I subscribe to a couple of RSS feeds for sites that do nothing but track other sites that have good design, or good use of CSS. It’s a great way to keep on top of what’s going on in the world of web design. One of those sites, Stylegala, recently profiled 31three.com. I was instantly drawn to 31three’s design, it’s simple beauty is a pleasure to look at. Well done guys! 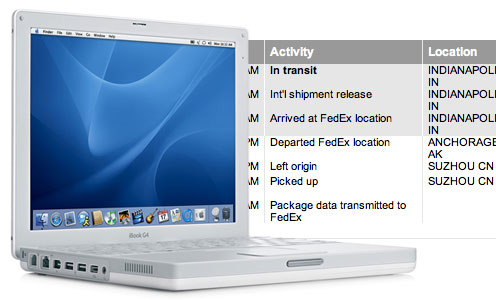 For about 6 months I’ve been considering buying a new laptop. I do most of my production work on a G5 tower, but I don’t really have a good mobile solution. I do have a laptop… it’s the original G4 Titanium Powerbook. It’s painfully slow to work on because it’s a mere 500MHz, with a dinky 8MB video card, and 20GB hard drive. It originally shipped with OS9 on it. Installing Tiger, and my apps took up most of the hard drive. It works, but I hated working on it.

A while back I decided I wanted an iBook, instead of another Powerbook, because I wanted the durability. Powerbooks are a bit delicate.

Lately, there has been rumors flying around that Apple may introduce the new Intel-based iBooks as early as January. I don’t know if this is going to happen or not, but it worried me a little. I don’t want one of the first Intel iBooks. I’m usually an early adopter, but this is a significant change in architecture. There are bound to be some hiccups with the first models to come off the line. I was also a little concerned about applications. They all need to be recompiled for Intel processors. Power PC apps will run in the Intel machines, but they’ll be under Rosetta (emulation). Running processor intensive apps under Rosetta is going to be a little slow, especially on lower-end machines. I don’t want to have to worry about that, and I don’t want to buy all new apps.

Last Friday, Apple had a Black Friday (1 day only) sale. They were offering $101 off iBooks, plus free shipping. I debated on buying it all day. Finally at 11:56pm I decided to go for it. I jumped online and bought the 12″ model (I wanted small) with 100GB HD and 1GB of RAM.

My online order technically registered with the Apple server at 12:04am (Saturday). Although my web receipt showed the discount, the email confirmation did not… because the sale had been over for 4 minutes. Luckily, I called Apple the next day and told them what happened, and they put the discount back in. :)

My order confirmation said the iBook would ship on December 2nd, but I got a happy surprise email from Apple saying it had shipped early, on the 29th. Surprisingly, it’s coming from China. I had no idea they were made in China.

Now I’m just waiting for it to arrive (I can’t wait), and hoping that Apple doesn’t introduce cool new, non-Intel, iBooks in January. That would suck! 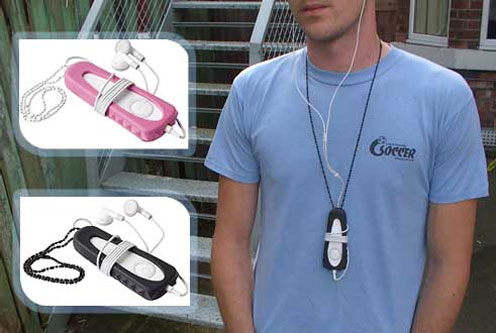 A few weeks ago I came across The story of Shufflicious. The Shufflicious is a case for the iPod Shuffle, dreamed up by budding industrial designer, and entrepreneur, Mark Williams.

If you own a Shuffle, you should have a look at Mark’s Shufflicious. 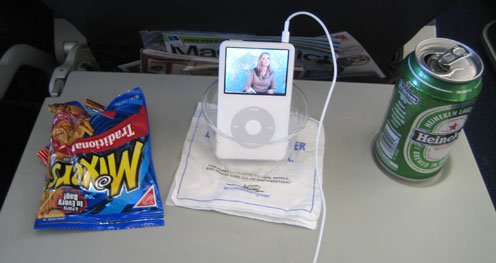 With everything that has happened recently, we felt like taking a little break, and getting out of town. We took Friday off and went down to Phoenix for the weekend.

It was great being able to hang out with friends, and visit some of my old haunts. It was a nice, relaxing trip. I’m glad we went.

On the flight out, I caught up on some of my video blogs, or video podcasts as Apple would have you call them. It was so nice being able to watch video on my iPod, rather than lugging a laptop down there.

What do you think of my iPod stand? It actually worked really well. I think I’ll grab a bunch of cups on my next flight… I’ll call them iCups, and sell them for $29.95 a pop.

As I’ve mentioned in previous posts, Apple is being a little cheap when it comes the accessories that ship with the new 5G iPod. And, the Apple branded accessories are a bit overpriced, in my opinion. But, there are alternatives out there. You don’t have to buy from Apple.

The picture above has 3 types of cables that I consider to be necessities… An iPod wall-charger, an extra USB-to-iPod cable, and an AV cable. If you buy them from Apple, you’ll spend $67. I found a great site, called Hand Held Items, that carries a wide variety of iPod (and other gadget) accessories for far less then what Apple charges.

I don’t want to mislead you. There is actually a noticeable quality difference between Apples products, and the no-name counterparts. Apple’s products have thicker molded plastic and wires. But, I have tested the no-name items thoroughly and haven’t had any problems. I would recommend them as a lower cost alternative. I’m happy with the cables that I bought.

I got this email from a friend the other day. I already have an AV cable, but I thought I would pass on the tip. Thanks Jason!

You may already know this… but if you are about to buy the Apple AV cable, you don’t need to.

If you have an 1/8th-inch AV cable from another device, like a portable DVD player or a camcorder, you CAN use this, even though Apple says you can’t. They needed to make the jack work for headphones, AND for AV, so the ‘video’ conductor in on the tip – if you put in headphones, they don’t reach the tip connector. This is not the way standard AV cables are wired. SOOO, with any standard AV cable, you need to reverse the Red and Yellow RCA connectors: 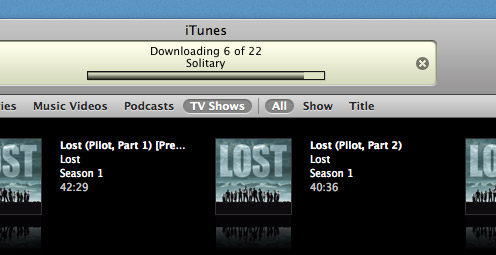 Before last night, I had never seen an episode of Lost. Tonight, I’m buying all of season one

I had actually bought the premier episode when Apple first announced the new 5G iPod (video). But, it was only to see what the quality was like, I didn’t actually watch the entire episode. Last night we did, and then I bought the second episode and watched that too. I’m already hooked.

Most, if not all, of the episodes are actually available (for free) through Podtropolis, the BitTorrent site I mentioned the other day. I was very tempted to download them from there. But, I am a firm believer in what Apple is trying to do. I want their effort to succeed. We need a legitimate (legal) way of doing this. Downloading shows is the wave of the future, and I want Apple to be on top of that wave. I have downloaded a few things from Podtropolis, but I won’t grab anything that Apple is selling, in an effort to help them succeed. Please, if you are interested in getting digital copies of Lost, help Apple out, and buy them 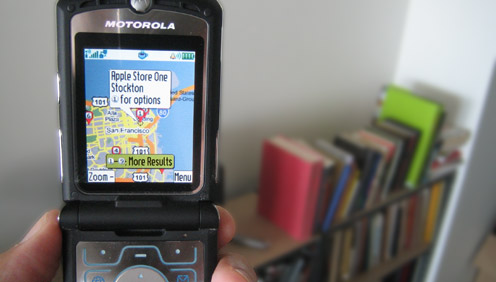 Have you ever been out and about, and desperately needed a pizza place, or an Apple Store, but didn’t know wher to find one? Well, help is on it’s way. Google has launched a mobile version of Google Local. It’s appropriately named… Local for Mobile.

It’s a java-based application that gives you full access to Google Maps (and satellite images) right on your internet-capable phone. The application is free, and so is the service. But, you will be paying your mobile carrier for the bandwidth, so you may want to check the rates on their data plans before spending hours looking at tiny little maps on your phone.

Not all carriers are supported, but I’ve tried it on Cingular, and although it was slow, it seemed to work fairly well.