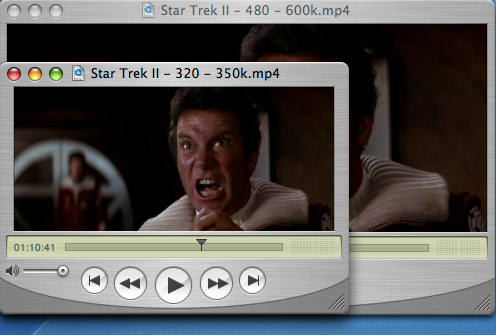 As I mentioned in Part I of the story, I’ve begun the process of ripping my DVDs into iPod ready movies. I’m using Handbrake, a great little open source (free) piece of software for Mac and Linux. I know there are Windows apps that can do this too, but I haven’t researched those. Mark Pilgrim has put together a nice tutorial on how to use Handbrake for this procedure so I won’t go over the specifics of that part of the process. I’m going to concentrate on file format, choosing a bitrate, and iPod battery life.

Let’s start with the official specs from Apple for video played on an iPod:

As you can see above, we can use H.264 and MPEG-4 movie formats. I would recommend using MPEG-4, at least when converting using Handbrake. Handbrake will do H.264, but it takes twice as long to convert, and there isn’t any substantial quality or size difference, at least not in the current (beta) version of Handbrake. Also, for some strange reason the iPod doesn’t always like the H.264 movies generated by Handbrake.

Another thing you will notice from the specs above is, within MPEG-4 you can go up to 480 pixels wide. You have a decision to make at this point. If you intend to watch these movies on your computer, as well as your iPod, then 480 wide may be a good solution… but only for your computer screen. On your computer, 480 is easier to watch because it is bigger and more clear. On your iPod (or a connected TV) the extra pixels are virtually useless, and won’t give you a better picture. If you are primarily going to watch the movies on your iPod (or connected TV) than you should stick with 320 pixels wide.

The last thing you should notice in the specs is the ability to play up to 768 kbps. Here is where most people make their biggest mistake, they automatically choose the highest bitrate possible. My biggest tip for you, is don’t under compress your movies. That’s right, I said UNDER compress. At 320 wide, 768 is way overkill for most movies. The result will be a file that is larger than it needs to be (taking up valuable drive space), and diminished battery performance (I’ll address that later on).

Here is a handy formula for determining the proper bitrate for an MPEG-4 movie… Are you ready?… It’s…

That formula will generally give you good quality at a reasonable file size. Some movies can even go below that rate, while others may need a little more, if they have a lot of extreme motion throughout the movie. Here is an example: I did some compression tests on one of my favorite movies… Star Trek II: The Wrath of Khan. The movie is widescreen, so at 320 wide, the height is 144 (not all widescreen movies are the same). Using the formula above, we would get…

230 kbps would be the best starting point for compressing this size movie. That being said, I found that 230 kbps was actually a bit low for this particular movie. I saw just a little bit more compression in some of the scenes than I wanted, so I bumped mine up 350 kbps. 300 may have been fine, but I was tired of compressing it.

I did several versions so you could see how the birate would affect file size. Star Trek II is one hour and 52 minutes long, and these all have an audio bitrate of 128.

There is no noticeable difference between the 350k version and the 600k version when played on the iPod screen or a connected TV. But, as you can see, the file size is half that of the 600k (480×208) version. If I had gone higher than 350, I would be wasting space and battery.

Although the 60GB iPod will play up to 20 hrs of music on a single charge, I was surprised to learn that Apple rates the battery at a mere 3 hrs for video playback (2 hrs on the 30GB iPod). Videos take a huge toll on the iPod’s battery. If your movies are bigger than they need to be, that battery drain will go even faster. The iPod tries to save power by loading as much of a video as it can into a buffer, that way it can spin down the hard drive. The larger the movie, the less it can load into the buffer, and the iPod has to spin the hard drive up more often. So, it is in your best interest NOT to UNDER compress your movie. Make them as small as possible, while maintaining acceptable quality. note: the same holds true for music… keep that in mind when you rip that CD at 320 kbps.