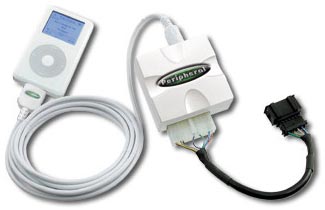 If you’ve been visiting the site for a while, you probably remember me talking about the NEO iON. The iON is a device for connecting your iPod to your factory car stereo. I had intended on buying one, but I couldn’t seem to find it in any local stores. I was hesitant to buy it online because if it didn’t work, I wanted an easy way to return it.

I found the iPod2Car at my local Best Buy. The iPod2Car is the same basic device as the iON. It allows you to connect your iPod to your factory car stereo using the built in CD-changer port on the back. Once connected, the cable charges your iPod, provides audio input to your stereo, and allows you to move forward and backward within a playlist using the controls on your stereo.

Today, I took on the challenge of installing it myself in my little Toyota Echo. It actually went pretty smoothly. It took me about 45 minutes to install. I’m sure a seasoned car-guy could do it faster. My biggest obstacle was figuring out how to disassemble my dashboard (to get to the back of my stereo) without breaking anything, and making sure I could get it all back together again.

The iPod2Car is now installed, and I’m pretty happy with it. It seems to work exactly as it should. I’ll hold off on my final thought until I have a chance to test it a little more. So far, I only played a few songs in the garage after I installed it.

UPDATE (10.21.05): I went for a long drive yesterday, and the iPod2Car worked great! As an added bonus, I discovered if I turn the car stereo off, the iPod automatically pauses, I don’t have to go manually stop the iPod too. When I turn the car stereo back on, the iPod automatically starts back up from where it left off. Turning off the car also pauses the iPod, but oddly, turning the car back on doesn’t restart the music, you have to manually unpause the iPod itself. Overall I’m pretty happy with the iPod2Car, and would recomend it to anyone looking for this kind of solution.

UPDATE #2 (10.21.05): In the previous update, I mentioned the iPod doesn’t come back on after the car is turned off/on, but that wasn’t quite true. It does come back on if you only turn the car off for a short period of time. I’m guessing that the iPod goes to sleep after a while, and that’s why it doesn’t turn back on if the car has been off for a bit. I’m betting it’s an iPod sleep issue, versus an issue with the cable.

One downside of the iPod2car is it’s price. Best Buy sells it for $199, and they offer installation for an additional $80, if you’re not comfortable taking your dash apart yourself. Another option would be an FM modulator (not transmitter) for $60-$100, and I’ve also seen cables that are like the iPod2Car, but instead of a dock-type connector they are just stereo mini cables (the go from your CD-changer port to your iPod headphone jack)… those are less expensive, but you lose iPod control from your stereo, and the power charging. I really wanted the integrated charging feature because I have too many cables in my life already.

One thing that really impressed me about the iPod2Car is it’s ‘recycling’ program. The kit comes with several cables, to accommodate different car / stereo models. You will typically only use one of them. So, the kit has a pre-addressed shipping box included, so you can send back the unused cables. I think that’s great!