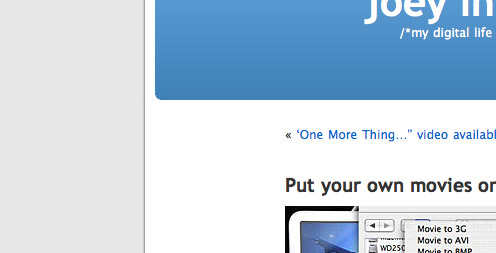 Anyone who knows me, knows that I don’t generally have a foul mouth. I am a strong believer in using language appropriately, I don’t spit swear words out in everything I say for no good reason. I choose my words carefully, and use harsh language only when I’m pretty pissed off. That being said…

They say imitation is the highest form of flattery, but there is a big difference between imitation, and plagiarism. Some disreputable sites out there don’t seem to know the difference, and this morning I came across one of those sites.

At first glance I thought… cool, this guy has similar interests, he’s writing about the same kind of stuff I write about. But, upon closer inspection I realized that his posts weren’t just similar… they were MY POSTS! After looking through the site I also realized that it wasn’t just one or two stories, the site is littered with my posts. In a few cases he changed the image slightly, or modified a few words… but in most cases they were word-for-word copies of my posts, using my images! My mood quickly changed from ‘cool’ to ‘you fuck-head!’

I’m not including a link back to the site, or referencing the site name because I don’t want to give this guy any traffic for stealing my stories. But, as you’ve probably guessed from my statement above, his name is Joey. This post is directed straight at you Joey!

I’m not against reposting content from other sites, I do it all the time. But the acceptable way to do it is to write your own brief opening statement, followed by the content you are quoting (in quotes… preferably in blockquotes), and including a link back to the original post. Basically you have to make it clear that these are NOT your words, and you must give credit where credit is due!

Joey, you’ve posted my stories (word-for-word) as if they were your own. You give no indication that you are quoting someone else, and you give no credit… that’s called stealing! I also noticed that you are doing this to a few other sites too, like Inhabitat, (yes, I recognized the other content). This is just wrong, and it’s unacceptable.

Joey, if you want to have a blog, then do the work… DON’T just be a lazy fuck-head and steal other peoples hard work!

I’ll be watching you!