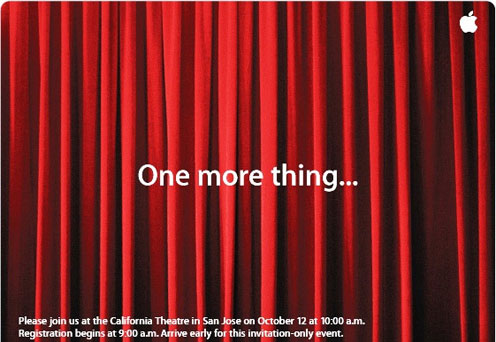 Anyone familiar with Steve Jobs keynote addresses should recognize his line “One more thing…”. It’s something he likes to say towards the end of a keynote, just before making a really big surprise announcement.

Apple sent out this invitation to members of the press inviting them to a special event next Wednesday (10/12). The most widely accepted theories of what will be announced include updated iPods, and pro machines (Powermacs & Powerbooks).

The iPod updates may even be what many of us have longed for. AppleInsider is quoting “reliable sources” as saying “Apple Computer has begun production of a new version of its iPod digital music player that will be capable of playing videos.” I personally am not going to get my hopes up too high this time.

Given the fact that Adobe has recently released Photoshop Elements 4.0 for Windows only, I wouldn’t be surprised if Apple will also announce some new software. (FYI… A Mac version of Elements 4 is supposedly on its way).