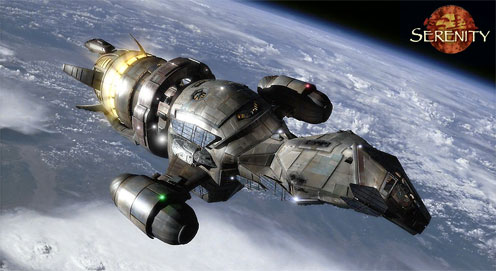 Just incase you forgot, Serenity opened today. Anne Marie and I went to an early afternoon showing, because we just couldn’t wait. We are both big fans of the show, Firefly, and have been looking forward to the movie for quite a while.

In a word… WOW! It was awesome! Even though I was excited to see Serenity, I went in thinking that it may suck. It was originally scheduled for a May release and was pushed back to September 30th, which is usually a bad sign. But, the movie was great.

All of the original cast members signed on for the movie. There was talk a while back the Ron Glass, better known as Shepherd Book, wasn’t going to be in the film. But, he was there along with everyone else. Although he did have a much smaller role than I would have liked.

I think they did an excellent job with the writing and the story. Everything from the humor to the character interactions were done in the flavor of the original show. That being said, I think Serenity will be just as enjoyable for someone who never saw Firefly.

Whether you are a long time fan, or a newcomer to the story, Serenity is a must see.

4 thoughts on “Serenity: A must see movie”