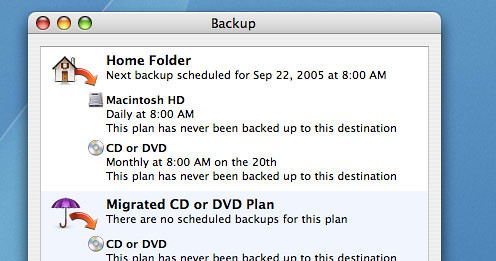 If you haven’t already heard, Apple made some upgrades to their .mac service yesterday. They bumped the amount of server space to 1GB, split between email and iDisc. They added Groups, which is I believe is some form of collaboration tool, almost like a forum. They also made some interface changes.

The biggest news for me was the Backup 3 upgrade. They’ve made some significant changes to it. For starters, they removed that awful brushed aluminum finish (I’m really starting to hate that look). They also changed the way you do backups, it’s much more based on having predefined sets then it used to be. The biggest change is it no longer writes files to CD/DVD as invisible files. That really annoyed me. Although it isn’t much better now. The new version writes all the archived files as a single backup file, similar in how Retrospect does it. So, you have to use Backup to restore the files. I would much rather be able to drag and drop from the archive. This method also makes it impossible to use any CD cataloging software to keep track of your archived files.

On the plus side, Backup 3 does disc spanning. It will break up a single large file (or many small files) across multiple discs. And… unlike Toast 7, you can actually get them back. Although you do need to use Backup, so it isn’t self contained, like Toast is SUPPOSED to be.

Twice in this post I’ve mentioned that you need to use Backup to restore your files, but that isn’t actually true. There is a trick you can use if, for whatever reason, Backup isn’t available. The Archive it creates is basically a Mac Package. Simply right-click (control-click) on the archive and select “show package contents” from the pop-up menu. Drill down a couple of layers and you’ll find a disc image. If you mount that image you’ll see all of your files. You can just drag them out of there to restore them.

Some of you may be asking… “Why do you buy .mac, do you really need any of those services?” The answer would be no, not really. I bought into .mac when it first came out because it did have some usefulness. But now, a few years later, I don’t really neeeeed anything it offers, but it is still useful, and I like to support Apple when I can. I think .mac is a good thing… especially for beginners. I sure wish they would bring back Virex though.