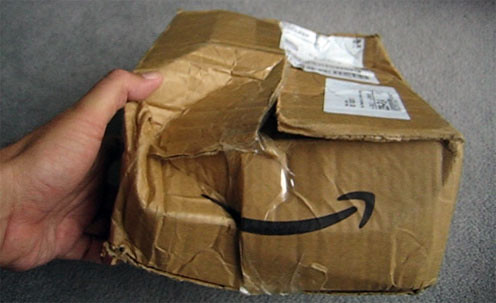 Here’s my new phone. Looks great, huh? This is how UPS delivered it to me. I’m not sure if I should be mad at UPS, or Amazon. Who knows when this happened. Fortunately, everything was OK in the box.

What kind of phone did I get you ask? Well, here’s the story… Until a few days ago, I had a Sony Ericsson T610. I’ve had it for a couple of years, and overall it’s been OK. But, for several months I’ve had the annoyance of having to jiggle my power cord just right to charge the phone because the connection had become lose. And, my hands-free jack stopped working all together.

For months now I had been following the iPhone rumors, just like the rest of the Mac fan(atics) out there. I wanted to get a new phone, but I didn’t want to do that and have Apple announce the coolest phone ever right after I bought something else. So, I just held in there.

After the very disappointing truth came out about the iPhone I just went ahead and bought the other phone that I really wanted. To make a short story long, I bought the Motorola RAZR… in Black. Best of all, it was free from Amazon, after a $150 mail-in-rebate that is. I had to sign a 2 year contract with Cingular, but that was fine because I was ready to ditch T-Mobile anyway.

How’s the new Moto RAZR you ask? It’s awesome! It blows away my old T610. The speaker is much clearer than on my old phone. Calls are very clear on both ends. The camera is much better too, not that I really care about that. Syncing with my Mac (using iSync) via bluetooth was a snap. You could also sync via a usb cable, but I haven’t tried that. I’m very happy with the RAZR, and I would recommend it to anyone looking for a new phone. The one and only complaint I have is with the “address book”. It should really be called a phone book, as it doesn’t hold addresses… just phone numbers and email addresses. It also tends to scroll fairly slowly. By the way, the Amazon deal is still good, at least as of the time of this writing.

As a side-note, when the box arrived all beat to hell, I made a little video of it just incase I needed to return it, if it had been broken. Since I had the video already, I thought I would share it with you.